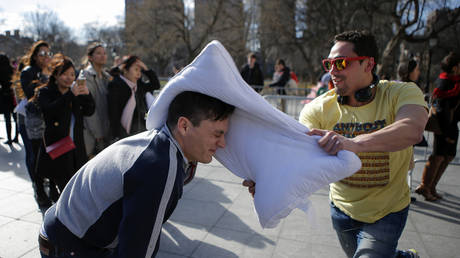 Let the pillow fight begin, as two of the most polarizing activists in American politics are soon to be business competitors, with gun-control crusader David Hogg taking on Donald Trump ally Mike Lindell, founder of MyPillow.

Hogg announced on Thursday that he and software entrepreneur William LeGate will create a new pillow company in about six months to compete with MyPillow. “William LeGate and I can and will run a better business and make a better product, all with more happy staff, than Mike the Pillow Guy while creating US-based union jobs and helping people,” Hogg said on Twitter.

.@williamlegate and I can and will run a better business and make a better product all with more happy staff than Mike the pillow guy while creating US based Union jobs and helping people. This pillow fight is just getting started.

The 20-year-old Hogg, who said he will work in an advisory role for the new company while focusing on his schooling at Harvard University, added that the business will try to hire formerly incarcerated felons, veterans and – if successful in driving Lindell out of business – former MyPillow employees.

“I don’t know about you guys, but I like pillow companies that don’t fund insurrections against the US government,” said LeGate, a 26-year-old censorship proponent who has worked to get social media users banned for posting content that he finds hateful, racist or otherwise objectionable.

Lindell has been an outspoken supporter of former President Trump, arguing repeatedly that the November 3 election was stolen from him through massive election fraud. His personal and company Twitter accounts have been permanently shut down for posting election-fraud claims and accusing the social media platform’s CEO, Jack Dorsey, of being “tied into” the alleged fraud.

Democrat politicians and activists have tried to frame making allegations of election fraud as tantamount to causing the January 6 US Capitol riot. Lindell also was accused of urging Trump to declare martial law, and such major retailers as Kohl’s and Bed Bath & Beyond stopped carrying MyPillow’s products. But Lindell said on Sunday that the company had received a surge in orders from supporters because of the political backlash, necessitating a hiring spree to “handle all the shipping.”

Lindell refrained from returning insults at Hogg and LeGate, telling media outlet Axios that he welcomes new competition. “Good for them… nothing wrong with competition that does not infringe on someone’s patent,” he said.

Hogg said the new company will prove that “progressives can make a better pillow, run a better business and help make the world a better place while doing it.” He added, “This pillow fight is just getting started.”