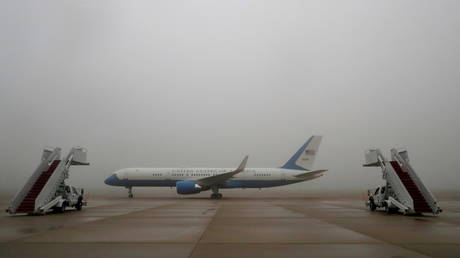 The Air Force Office of Special Investigations (OSI) is scrambling to determine how and why an intruder gained access to Joint Base Andrews, where Air Force One is stored, the day before President Joe Biden’s inaugural flight.

Biden is scheduled to depart Joint Base Andrews for his home state of Delaware on Friday, but Air Force officials have confirmed that an intruder gained access to the base on Thursday.

Details are sparse and it is unclear how far the person got, whether the suspect managed to interfere with any aircraft at the facility, and whether they are in custody or not.

Also on rt.com
‘America is back!’ Biden talks ‘tough’ on Russia and China, vows to reclaim ‘moral leadership & defend democracy’


“An unauthorized individual gained access to Joint Base Andrews. The incident is under investigation,” a spokesperson said in a statement late on Thursday.

“The Air Force Office of Special Investigations (OSI) is lead on this investigation. Any requests for information related to the incident can be referred to OSI.”

The base is home to the 89th Airlift Wing, which is responsible for escorting the “president, vice president, cabinet members, combatant commanders, and other senior military and elected leaders,” during official air travel.

Joe Biden is scheduled to take his first flight aboard Air Force One as president on Friday and there have been no reports to suggest the flight will not go ahead as planned.

Tensions remain high in the aftermath of the Capitol riots on January 6 in which irate Trump supporters stormed various government buildings in Washington, DC as Biden was due to be officially certified as the next president of the US. The incident has since been dubbed an attempted “insurrection” by many in the Democrat establishment and mainstream media.