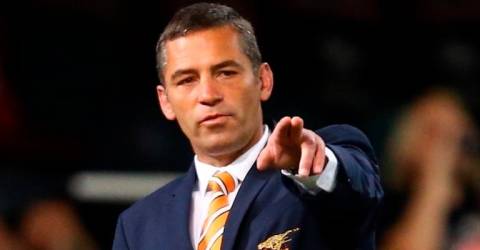 Italy take on France, who they lost 36-5 to in the Autumn Nations Cup two months ago, with reigning champions England next up in a week’s time.

“The real opponent is ourselves, it doesn’t really matter who we play against,” said the South African.

“If we want to continue on the path of growth we must first look to home.

“We are developing players to increase the squad at our disposal and bring home positive results with continuity.

“We have to try to play as we know how to. We try to progress. For the moment we are not at the stage of being able to think of the others before ourselves.

“We want to win, of course, but winning or losing doesn’t really change what we have to do the following week (against England).”

Italy are on a run of 27 consecutive defeats in the Six Nations with their last win against Scotland in 2015.

Since joining the expanded championship in 2000 they have taken the wooden spoon 15 times including last season.

“I have more confidence in the role of captain than a year ago thanks above all to the support I had from the team,” said Luca Bigi who took over from long-time skipper Sergio Parisse.

“We are up against a France side that showed a very high level of rugby in 2020 with a lot of quality in its squad, a very physical scrum and important individuality between the backs.

“We have looked at their characteristics and focused on what we could do, staying consistent throughout the 80 minutes.” – AFP