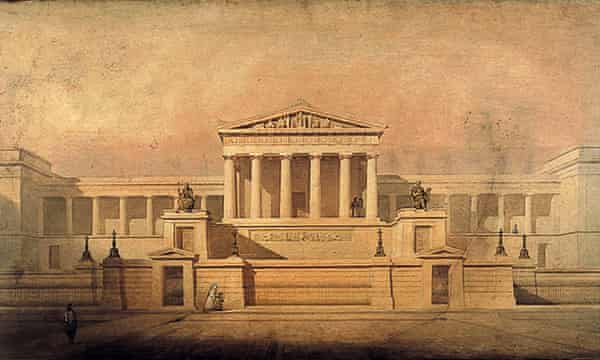 When renowned Scottish architect Thomas Hamilton set about designing a home for Edinburgh’s Royal High School in the early 1800s, he cemented the city’s reputation as an “Athens of the North” with a Greek revival building still considered one of Europe’s finest.

But despite being widely lauded and variously floated as a home for the Scottish parliament, a national photography centre and a military history museum, the building has lain empty since the school moved in 1968. Now, a decision by the city’s council to strip hotel developers of the site’s lease could see it back in action once again.

The A-listed building (which means it’s of special architectural or historic interest and an outstanding example of a particular period, style or building type) on Calton Hill, has been at the centre of debate since 2009 when developers Duddingston House Properties won a competition designed to find a sustainable use for the site. But plans published in 2015 for a luxury hotel in partnership with London-based Urbanist Hotels provoked a backlash and the site has remained empty while heritage groups and the public fought the proposals. In January, after years of planning disputes and rejected appeals, the city’s council ended its deal with the developers and announced plans to place the lease on the open market.

The site will not be made available for sale, but rather open to bids for sustainable long-term uses, a move which has been welcomed by heritage groups and campaigners.

“The Royal High School is recognised as the very best Greek revival building in the world,” said Terry Levinthal, director of heritage and conservation charity the Cockburn Association. “Our greatest fear was that after years of [the current leaseholders] achieving nothing, they could be allowed another bite at the cherry. That would have been a very negative thing given the comprehensive dismissal of those proposals.”

One of the frontrunners in the upcoming bidding war is likely to be the Royal High School Preservation Trust, a campaign group established in 2015 to move St Mary’s music school from the west of the city. The group is financially backed by charity the Dunard Fund and has already achieved planning consent and council support for its proposal, but says it welcomes the chance to present a positive vision for the site in an open contest.

“It’s not just a new home for a music school, it’s about expanding the cultural heart of Edinburgh,” said William Gray Muir, chair of the trust, of the group’s proposal which includes plans for a new concert hall, open public space to the front of the building, and the renovation of the attached western garden and pavilion for public use. “We hope to bring music to a wider audience but also to cement the future of the building within its setting, and give it a use consistent with its original conception as a cultural beacon for Scotland.”

Levinthal said the Cockburn Association supported these “very merited” proposals. “As a principled use for the building, that struck us as being much more suitable than a luxury hotel,” he said.

It is not yet known if the hotel developers, who did not respond to a request for comment, will make a fresh bid for the building. However, council finance leader Rob Munn told the Scotsman that there were “a number of interested parties out there”. A report detailing the next steps in the process would be published in May, he said.

For campaigners, the fate of the Royal High School, established as a free educational facility for rich and poor children alike with the ethos that all deserved to learn in an unapologetically lavish environment, represents a fight for the heart of Edinburgh, and indeed Scotland.

“Its history gave it a sort of moral importance to the city, and said something about how we as Scots see ourselves: liberal; democratic; enlightened; outward looking,” said Gray Muir, who is optimistic about his group’s chances. “What we do with this building now will say an enormous amount about how we think of ourselves as a nation.”