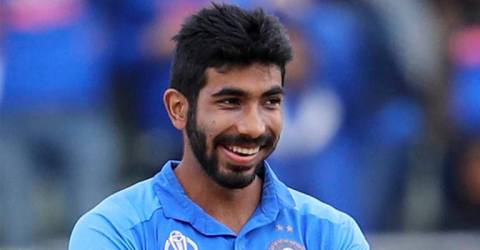 CHENNAI: India quick Jasprit Bumrah (pix) on Friday blamed a coronavirus ban on shining the ball with saliva for bowlers not getting more wickets against England on day one of the opening Test.

England finished on 263 for three with skipper Joe Root batting on 128 after completing his century in his 100th Test at the start of the four-match series in Chennai.

Bumrah, playing his first Test at home, claimed two wickets including Dom Sibley out lbw for 87 in the final over of the day as stumps were called.

But Bumrah, known as a yorker specialist, said it was tough to maintain the old ball without applying saliva – a practice that aids reverse swing.

“When the wicket is on flatter side, because of new COVID-19 rules, there are very limited options to shine the ball, so in India the ball gets scuffed easily,” Bumrah told reporters.

“So to make the ball heavy you have to shine one side sometimes. With sweat it doesn’t really serve the purpose. But these are the rules and we have to make do with what we have at the moment.”

The International Cricket Council (ICC) last year implemented the ban at the peak of the pandemic after receiving medical advice that spit posed a COVID-19 transmission risk.

Bowlers traditionally get the ball to move in the air, deceiving the batsman, by shining one side using sweat or saliva.

The SG ball used in Indian Test matches and in use in Chennai became scuffed up after 40 overs. The second new ball is due after 80 overs in one innings of a five-day game.

Root and Sibley put on 200 runs for the third wicket to thwart the Indian bowling on what appeared to be a good batting wicket at Chennai’s MA Chidambaram Stadium.

“We are not trying to complain how the wicket is but trying to figure out the solutions and solve that,” said Bumrah. – AFP