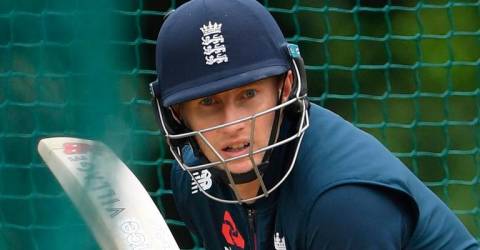 CHENNAI: Skipper Joe Root (pix) hit a century in his 100th Test on Friday, but said England need a minimum 600 runs in the opening match against India.

England ended on 263 for three after Dom Sibley fell to paceman Jasprit Bumrah for 87 in the final over of day one and stumps were called in Chennai.

England elected to bat after winning the toss in the first match of the four-Test series.

Root, unbeaten on 128 and battling cramp in the final session, put on 200 runs with Sibley after England slipped to 63 for two in the first session.

“I think we’ve got to look to try and get as many as we can – 600, 700 if we can, really try and make the most of the first innings while it’s good,” Root told reporters.

“Those footholes are starting to wear quite quickly. So, if we can bat the whole of tomorrow and maybe into day three then things could speed up quite quickly for us and you never know what can happen from that point onwards, but ultimately we’ve got to try and back up today.”

Root made his Test debut in India in 2012 and his century comes on the back of match-winning knocks of 228 and 186 in Sri Lanka.

Friday’s effort was his third successive and 20th Test ton and termed it a “very special” knock.

“Yeah, very special. Last night the guys actually put a little surprise together for me – put some videos from some past players, some friends and family. And Ben in particular, stood up and said some really kind words,” said Root.

“Then to come today and for us to start this series in the way that we have – it couldn’t have gone any better bar a little blip at the end there.”

“I certainly feel like I’m in some good form and I need to make sure I cash in on it I think over the course of my career, I’ve not always gone on and made really big scores so to be going and doing that currently is really pleasing,” he added.

The 30-year-old handled the spinners with aplomb as he swept – and reverse swept – to precision in his 197-ball knock. He struck 14 fours and a six.

Sibley completed his second successive Test fifty after a cautious but steady start with opening partner Rory Burns, who made 33.

But he fell short of his third Test ton when trapped lbw, trudging back to the pavilion after an unsuccessful review.

Left-hander Burns fell to off-spinner Ravichandran Ashwin for 33 while attempting a reverse sweep just before lunch.

Bumrah, who is playing his first Test at home, struck soon after to trap new batsman Dan Lawrence lbw for nought.

“For us all wickets are equally important and we are not focusing on one particular individual. And we picked up three wickets today, main focus is to pick up seven wickets,” Bumrah said on the importance of Root’s wicket.

“There are very good players in their team and everybody gets equal respect.”

The series will decide who plays New Zealand in the final of the inaugural World Test Championship. – AFP