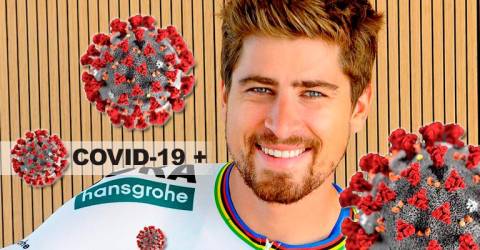 PARIS: Three-time world champion Peter Sagan’s (pix) preparations for the new cycling season have been hit after the Slovakian tested positive for Covid-19, his Bora-Hansgrohe team announced in a statement on Saturday.

All three have gone into quarantine on the island of Gran Canaria, where the German team was in training.

“On January 29th, we had a PCR test done in a local laboratory in order to be able to fly back home,” Peter Sagan said in the statement.

“Unfortunately, the results weren’t what we would have hoped for and all three of us tested positive for Covid-19.

“We are all feeling well but, obviously, since that day, we have remained in quarantine.

“Hopefully, our next test results will be negative so that we can resume our normal training schedule as soon as possible.”

Bora-Hansgrohe boss Ralph Denk said he did not know how the positive tests might affect Peter Sagan’s season.

“What this means for the start of the season cannot yet be exactly known,” he said.

“First, all three must be fully healthy again and receive medical clearance, and then we can consider what the next steps will be.”

The 2020 season, which was badly truncated by the pandemic, was less prolific for the three-time world champion than usual, notably failing to add an eighth green jersey to his collection on the Tour de France.

Realistically, the winner of the 2016 Tour of Flanders and the 2018 Paris-Roubaix should be back in the saddle for the first big one-day races of the season, the Het Nieuwsblad and Kuurne-Bruxelles-Kuurne circuit.

The two Belgian events are scheduled for Feb 27 and 28. – AFP