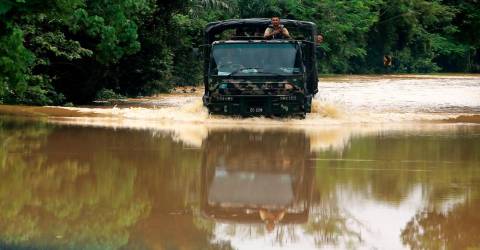 CHENNAI: Joe Root’s (pix) landmark double century for England against India in the opening Test made his teammates look “rubbish”, Ben Stokes said in a tribute to his captain on Saturday.

The captain, who resumed on his overnight 128, hit a big six to become the first player to go past 200 in his 100th Test. He made 218 before departing in the final session in Chennai.

England rode on Root’s masterclass to reach 550 for eight at close on day two. Dom Bess, on 28, and Jack Leach on six, were at the crease.

Root’s remarkable feat – his fifth Test double ton – came after a quickfire 82 from the returning Stokes. The pair put on 124 for the fourth wicket.

“He makes us all feel pretty rubbish. How easy he makes batting look. I was quite surprised he ran down the wicket and hacked a six to bring up a double,” Stokes told reporters.

“He is in phenomenal form. He dominates spin, incredible to watch. I don’t think we have had an England batsman ever to play spin in the way that he does.

“He has got an answer and option for everything that’s thrown at him. It’s a delight to watch him at the moment.”

Root, who expertly kept India’s spinners at bay in his 377 ball marathon, extended his golden run that followed match-winning scores of 228 and 186 against Sri Lanka in Tests last month.

Left-hander Stokes, who along with Jofra Archer and Rory Burns returned to the squad for the four-Test series after missing the Sri Lanka tour, hit his 23rd Test half-century – with 10 fours and three sixes – before falling to Shahbaz Nadeem’s left-arm spin.

“Nice to come back in with a bit of time off and spending some time in the middle,” Stokes said of his attacking cameo.

“Batting first after putting ourselves in and being 500 or whatever, we are with two wickets remaining on to day three is a very strong position.”

Stokes, a right-arm paceman, said the team has no thoughts of declaring their innings and would like to bat for another hour Sunday morning.

But he cautioned that a big first innings total does not guarantee a win on Indian pitches.

“It’s tough to take 20 wickets anywhere but out here 20 can be hard to come by. We know we have a big challenge ahead.”

After Stokes’ wicket, Root and Ollie Pope got going to frustrate the Indian bowlers before Ravichandran Ashwin broke through.

Ashwin trapped Pope lbw for 34 and Nadeem got Root’s prized scalp with a delivery that straightened up to hit the batsman’s pad.

Root reviewed the call but replays showed the ball would have hit leg stump. India skipper Virat Kohli shook hands with his opposite number as he walked back to the pavilion.

“It feels nice to get big names out and break partnerships,” Nadeem said on getting key wickets of Stokes and Root.

Nadeem said it was tough to bowl to a batsman who is sweeping well, “obviously you will have problems when a batsman starts sweeping you but then you need to stick to your plans”.

Jos Buttler, playing his 50th Test, tried to take on the bowling with a few attacking shots but Sharma bowled him.

Bess, who was dropped on 19 as Rohit Sharma spilled an easy chance at mid-wicket off Washington Sundar, and Leach, took the team to the close, adding 30 more runs.