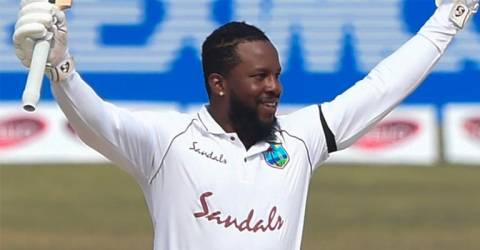 DHAKA: Kyle Mayers (pix) made an unbeaten double hundred on his Test debut to help West Indies snatch an extraordinary three-wicket victory over Bangladesh in the first Test on Sunday.

Hosts Bangladesh declared their second innings on 223-8, setting West Indies a daunting victory target of 395 in Chattogram, and the touring side completed the fifth-highest successful run chase in Test history.

Mayers added 216 runs with Nkrumah Bonner (86) to turn the match on its head and took a single off spinner Nayeem Hasan to seal a fairytale victory for a second-string West Indies side led by Kraigg Brathwaite.

Mayers, a 28-year-old left-handed batsman from Barbados, remained unbeaten on 210, including 20 fours and seven sixes, and became only the sixth player to score a double hundred in the fourth innings of a Test.

“It’s a great feeling to be playing Test cricket,” Mayers, who averages about 29 in first-class cricket, said after collecting the man-of-the-match award.

“Then to go on and score a century, and then to make it a double, and then going on to win this Test.

“A guy making his debut and making a double should inspire all youngsters to work hard and reach this level.”

At 59-3, West Indies looked in trouble but Brathwaite said he never lost belief.

“We knew it was an open game. We trusted our plans, and Bonner and Mayers showed that they can stick to the plans, and make it work,” he said.

Bangladesh captain Mominul Haq admitted the hosts did not bowl well on a final day track.

“But all credit goes to Bonner and Mayers who batted really well.”

The second and final Test starts in Dhaka on Thursday. – Reuters