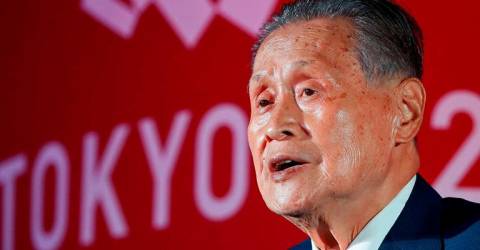 Mori has apologised for comments last week in which he claimed that women speak too much in meetings, and the International Olympic Committee has said it now considers the matter closed.

But in a two-day nationwide survey of over a thousand people by Kyodo news agency, 59.9% of respondents said they did not think the 83-year-old former prime minister was fit to serve as head of the Tokyo 2020 Olympics.

Only 6.8% said he should stay in the role, while the agency did not say how the remaining 33.3% answered.

Tokyo Governor Yuriko Koike on Friday said she was left “speechless” by Mori’s remarks, while Japan Olympic Committee chief Yasuhiro Yamashita said the comments were inappropriate, but did not call on him to resign.

An online campaign calling for action against Mori has attracted more than 128,300 signatures, including from Grammy-winning musician Ryuichi Sakamoto.

The row is the latest headache for organisers already battling public disquiet about the virus-postponed Games.

Almost half of respondents in Sunday’s poll backed a further postponement, with 35.2% supported cancelling the games altogether.