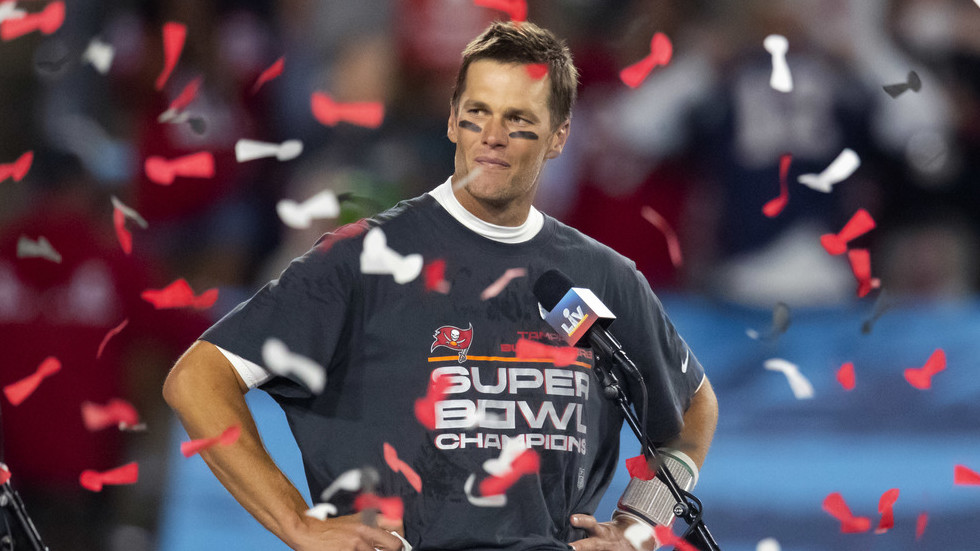 Comparing all-time greatness within and across sports has always been a futile endeavor, but it reached farcical new heights after Tom Brady’s latest Super Bowl success. And this being 2021, race and gender had to be dragged up.

The evergreen Brady defied time and a young pretender to pick up a record-extending seventh Super Bowl ring on Sunday as he steered the Tampa Bay Buccaneers to victory over the Kansas City Chiefs.

It was a case of new team but same story for the 43-year-old as he made his 10th appearance in the NFL showpiece, clinching a fifth Super Bowl MVP accolade for good measure.

Predictably, Brady’s latest feat rekindled that most fraught-yet-fruitless of sporting debates: who is the greatest athlete of them all, the GOAT of GOATs?

Anyone opening Twitter at the weekend would have been bludgeoned with graphics showing how Brady compares to the likes of Tiger Woods, Michael Jordan, Serena Williams, Michael Phelps, Muhammad Ali, Wayne Gretzky or Lionel Messi.

Not satisfied with merely debating Brady’s NFL credentials, the discussion was expanded to encompass sports as disparate as ice hockey, tennis, swimming or boxing.

And what about solo pursuits versus team sports? Do achievements in the former count more than in the latter?

Beyond that, what about the aspects inherent to particular sports? Does success in football – or soccer, if you prefer – mean more because of the millions upon millions of youngsters who dream of glory, compared to the lower level of numbers playing tennis, for example?

Moreover, how do we take into account factors comparing greatness across generations?

In short, debating GOAT status even within the parameters of a single sport is rife with pitfalls; attempting to do so across all sports and all eras is inevitably a hiding to nothing.

It is, was, and always will be a frivolous question, fun to discuss with friends or entertain every now and then in the back pages of newspapers, but which has so many dimensions it can never truly hope to be quantified, qualified, or comprehensively answered.

Also on rt.com
‘Mighty WHITE of him’: Super Bowl quarterback Tom Brady excoriated for refusing to repent for liking Trump (and being white)


In recent days, however, the GOAT talk surrounding Brady has seen an aspect to the discussion altogether different, and one altogether infused with the ‘wokeness’ of the age in which we live.

It picked up pace as Brady prepared for another tilt at Super Bowl glory and continued as he basked in victory afterwards.

One aspect involved dragging up Brady’s friendship with Donald Trump and supposed MAGA proclivities. That included some – such as Nancy Armour of USA Today Sports – pointing to Brady’s ‘white privilege’ when compared to NFL outcast Colin Kaepernick.

It continued on Sunday after Brady’s success, when as his name trended on Twitter, so did that of Serena Williams – indicative of a scramble among social justice warriors for an antidote to all the love heading the way of the NFL star.

The insistence from many such observers was that Brady can’t be the GOAT – purely by dint of his gender, politics or race.

We had the suggestion that Serena Williams, for example, must automatically be deemed the greater in any sporting discussion because she won the 2017 Australian Open while pregnant (remarkable as he may be, Brady winning a Super Bowl while carrying a baby bump seems beyond even him).

It wasn’t just titles, accolades or performances – we had to ponder race, gender and politics in any consideration of sporting greatness.

when Tom Brady wins a game while pregnant y’all can call me but until then Serena Williams is the greatest athlete of all time.

Folks saying it doesn’t matter— yes it does. The debate around Brady is steeped in an ongoing history of racism & sexism in professional sports.

True, character has always been one of the factors up for debate which could be added to the list for determining GOAT status, alongside team-based achievements versus individual ones, and so on.

Social profile can burnish a sporting legend – such as with Muhammad Ali – or diminish it (Lionel Messi, for example, is often denigrated for not being the larger-than-life hero that Diego Maradona was).

Brady is far from perfect, and his career is not without blemishes or misdemeanors. Famously, he was suspended for four games in the ‘Deflategate’ scandal of 2015, and even Sunday’s game did not pass off without controversy, with the Tampa Bay star being involved in a spat with a rival player.

But then again, those such as Williams also bear scrutiny for aspects of their behavior (who can forget her epic meltdown in the 2018 US Open final). Even last year’s Michael Jordan hagiography, The Last Dance, dredged up questions on the effect his relentless desire to win had on his teammates.


In this age of digital enlightenment, though, Brady seems much less likely to be indulged for any flaws or celebrated without caveats, whether because of ‘white privilege’, gender, or political orientation.

What became clear over the weekend is that if the debate about sporting GOATs was all-too frivolous before, it has become even more so when suffused with the bleating of the supposedly liberal social media age.