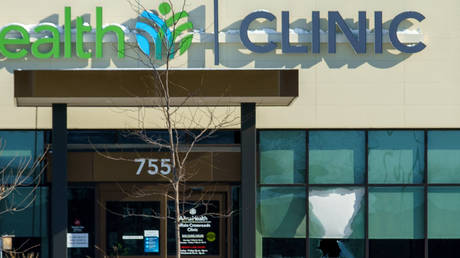 Several people have been rushed to hospital after a gun and bomb attack at a health clinic in Buffalo, Minnesota, according to the state governor. One suspect has been arrested and is believed to have acted alone.

The incident took place at the Allina Health Clinic in Buffalo, a small city located some 64km north-west of Minneapolis.

“It was an active shooter situation and some improvised explosive devices. It’s not confirmed yet the casualties or those injured,”  Minnesota Governor Tim Walz told reporters. One suspect, thought to have acted alone in carrying out the attack, was arrested by Buffalo Police, he added.

Multiple people were wounded in the incident, local police representative Kelly Prestidge said earlier, also adding that she was unaware of the severity of their injuries or if there were any fatalities.

Media reports citing emergency dispatch audio said that up to five people were wounded by gunfire, one of them a woman who sustained three gunshot wounds. The casualties were taken to nearby hospitals by emergency vehicles and helicopter. The detained man was suspected of being the perpetrator.

A blast also reportedly rocked the clinic, prompting the evacuation of medical personnel. “We just had a bomb go off in the clinic,” the dispatch audio revealed, according to local reports.


The FBI said that they were sending bomb technicians to the site, but couldn’t confirm the presence of an explosive at the scene.

The circumstances of the shooting and the motives for the attack are being investigated.