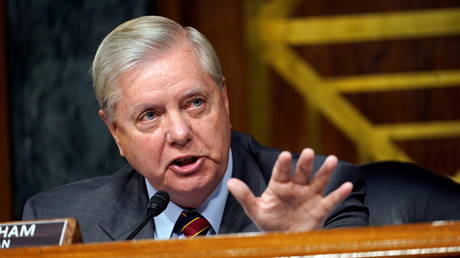 Speaking to Fox News on Monday evening, Graham said part of the Republicans’ strategy in the impeachment trial could be calling in Democrats who have used inflammatory language similar to Trump’s on January 6.

“Here’s what I can tell you: if the House managers want to call one witness, the defense is going to call all the people you named and then some,” the South Carolina senator promised.


Graham added that Democrats have “declared war on the presidency itself” and said the impeachment trial, which kicks off today, is tainted by the fact that the House passed the article accusing Trump of “inciting an insurrection” without having an actual hearing, witnesses, or providing the then-president with a defense.

Those in favor of impeachment, despite Trump no longer being in office, have argued his speech in Washington, DC shortly before the US Capitol riot incited supporters and turned them towards violence. Though Trump would later denounce the violence and tell those rioting to “go home,” he continued pushing election fraud theories during his speech and told supporters to “fight like hell.”

Graham is not the first Republican senator to argue that legally punishing such inflammatory language would open up a wide net for other politicians, especially Democrats.

Sen. Rand Paul (R-Kentucky), who has blasted impeachment proceedings as a “partisan affair,” told Fox this week that if Trump committed an impeachable offense, then so did Schumer when he told Neil Gorsuch and Brett Kavanaugh they would “pay the price” if they voted in favor of a controversial Louisiana abortion law.

“He went to the Supreme Court, stood in front of the Supreme Court and said specifically, ‘Hey Gorsuch, Hey Kavanaugh, you’ve unleashed a whirlwind. And you’re going to pay the price,’” Paul said. “This inflammatory wording, this violent rhetoric of Chuck Schumer was so bad that the chief justice, who rarely says anything publicly, immediately said this kind of language is dangerous as a mob tried to invade the Supreme Court.”


Paul pointed to numerous other Democrats, including Harris, who has come under fire from conservatives for promoting a bail fund for Black Lives Matter protesters. Though she has condemned protests that turned violent in the past, many have pointed to her support of the fund as support of violence. One man bailed out twice, for example, is facing charges including damaging a police precinct.

“Kamala Harris has offered to pay people’s bail who tried to burn down the courthouse and were rioting in the cities. She offered to pay the bail. Is that inciting people to violence when you’re willing to pay people to get out of jail after they committed violence? Should Kamala Harris be impeached? No, the answer is no,” he said, adding that Trump never “did anything close to what” Harris did.

In order for Trump to actually be convicted, all 50 Democrats in the Senate will need to vote in favor of impeachment, as well as 17 Republicans.