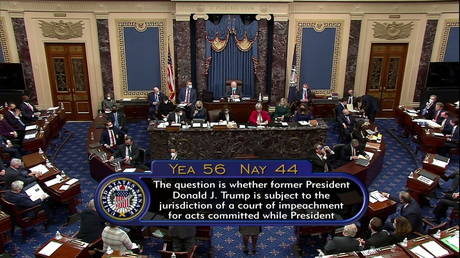 A simple majority of US Senators have voted to recognize the impending impeachment trial of former President Donald Trump as constitutional. Trump’s legal team insisted the chamber lacks the jurisdiction to try an ex-president.

Six Republicans joined Senate Democrats to give the go-ahead for Trump’s second impeachment trial. Mitt Romney, Bill Cassidy, Ben Sasse, Susan Collins, Lisa Murkowski and Pat Toomey broke with the rest of their party to guarantee the trial moves ahead. The task was not daunting since only a simple majority was needed, with the final tally being 56-44.

The vote came after some four hours of debate that saw Trump’s lawyers argue that Democrats have been hell-bent on impeachment from the first days of his administration. Trump’s defense attorney David Schoen accused Democrats in the House of an “insatiable lust for impeachment,” while playing a video that showed calls to impeach Trump by his most fervent critics, such as Rep. Maxine Waters (D-California) , throughout his time in office.“In this unprecedented snap impeachment process, the House of Representatives denied every attribute of fundamental constitutional due process that Americans have correctly come to believe is what makes this country so great, “ Schoen charged, as he displayed the clip.

Raskin, for his part, opened the debate by playing an extended video, where Trump’s allegations of election fraud were interspersed with the footage from the chaotic events that unfolded in the Capitol on January 6, when a crowd of Trump supporters stormed the building.

Democrats kick off impeachment trial with video of Jan. 6, showing Trump’s remarks at the rally followed by the violent and deadly insurrection in the Capitol. “Senators, the president was impeached by the U.S. House of representatives January 13th for doing that,” Raskin says pic.twitter.com/YOA75QXEnc

Raskin, who teared up while making case for the impeachment on the Senate floor, earned praise from fellow Democrats, such as progressive Alexandria-Ocasio Cortez for his compelling speech.

.@RepRaskin makes us all so proud.This is truly who he is. A man of great, unabiding love for our country and our democracy, who fights for everyone and our collective future.

In the run-up to the proceedings, Raskin, however, was accused of hypocrisy by some Republicans, reminding he objected to Trump’s Electoral College votes from Florida back in 2017.

Trump’s lawyers argued that not only the former President did not incite an insurrection that resulted in the January 6 riot at the Capitol, but also that he might not be eligible for trial by the lawmakers, since he is a private citizen.


The proceedings in the Senate are set to resume at noon ET on Wednesday with Trump’s legal team and House impeachment managers arguing their cases. It is believed to be extremely unlikely that the Senate convicts Trump on its second try, however, since at least 17 Republicans will need to side with Democrats for the required two-thirds supermajority in the upper house.