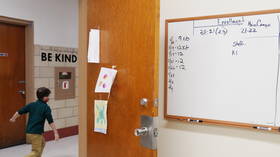 Schoolteachers have agreed to return to classrooms in Chicago, ending one of the most high-profile battles to get unions to go along with reopening schools shuttered amid the Covid-19 pandemic, but the deal comes with strings.

To begin with, high schoolers will be left out entirely, meaning the controversial experiment with online-only classes that began with school shutdowns last March will continue indefinitely for about 73,000 students in grades 9-12. The teachers union also won a major concession on vaccinations, ensuring that all 25,000 members will have an opportunity to receive their Covid-19 shots before returning to classrooms – contrary to CDC guidelines.


“Vaccination of teachers is not a prerequisite for safe reopening of schools,” CDC director Dr. Rochelle Walensky said last week in a White House press briefing.

But Chicago Mayor Lori Lightfoot and Chicago Public Schools chief executive Janice Jackson faced the likelihood of the city’s second teacher strike in three years or a lockout if they didn’t meet the union’s demands. The union also won a pledge to shut schools down again for at least 14 days if the city’s positivity rate for Covid-19 tests rises for seven straight days and reaches at least 10 percent. Teachers who are in at-risk health groups or are caregivers for relatives with such conditions will be allowed to continue doing their classes remotely.

“The ratification of our agreement ensures families have options to choose in-person learning and make a plan that is best for them,” Lightfoot and Jackson said Wednesday in a joint statement.

Pre-K and special education students will be able to return to schools on Thursday. In-person kindergarten through 5th grade classes will resume on March 1, while grades 6-8 are scheduled to be back in classrooms on March 8.

Lightfoot had argued that many of Chicago’s 340,000 public school students, especially black and Hispanic children, were left behind by remote classes. The city undertook a $100 million plan, such as providing protective equipment and thousands of classroom air filters, to make schools safe.

Pressure from teachers unions has undermined President Joe Biden’s plan to get schools across the nation reopened after the shutdowns were followed by falling test scores and rising depression and suicides among children. White House Press Secretary Jen Psaki said Tuesday that Biden’s goal is to have more than half of the nation’s public schools offering at least some in-person classes at least one day a week by the end of April. And just as in Chicago, high schoolers would be left out.

According to the Burbio School Opening Tracker, 64 percent of K-8 students nationwide are already getting at least some in-person instruction, meaning it’s already higher than Biden’s 100-day target.