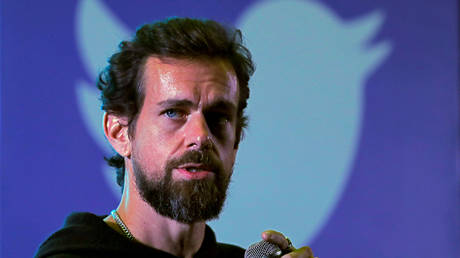 Twitter founder Jack Dorsey has teased an ultra-customizable new platform allowing users to build the ultimate echo chamber by picking out the “ranking algorithms” that shape their feed – as Twitter’s own usefulness diminishes.

Dorsey fleshed out ideas for a long-promised decentralized social network tentatively dubbed Bluesky in a phone call with investors on Tuesday, The Verge reported. He suggested that giving people the option to select ranking algorithms themselves would attract (and keep) users much better than leaving the choices up to a single company (i.e. Twitter) with heavy-handed moderating power.


Not only would allowing users to customize which algorithms are deployed on their feed “give people ultimate flexibility in terms of” what content they see, but giving users the ability to create their own cross-platform recommendation hybrids would let Twitter access “a much larger corpus of conversation” that could then be served up to other users – allowing the company to be “competitive” without having to devise such algorithms from scratch.

The move would “help out business,” Dorsey explained, but it could also “drive more people into participating in social media in the first place.” It’s not clear if Bluesky would welcome the hundreds of thousands of users booted off Twitter in the last year.

Giving Twitter users more freedom wasn’t Dorsey’s only motivation for building Bluesky, of course – the founder acknowledged that allowing users to pick and choose the algorithms that curated their feed would “address some of the problems” surrounding Section 230, the beleaguered piece of internet legislation that shields social media platforms from legal repercussions for the content users post.

Passed in 1996, the rule protects any “interactive computer service” from being held responsible for anything posted by a third party. It has recently been in the crosshairs of Republican and Democratic legislators alike, with conservatives accusing the platforms of ideologically-motivated censorship and liberals insisting the companies aren’t doing enough to shut down “hate speech” and other “harmful” material.


Bluesky was announced in December 2019 as a decentralized social network on which Twitter would be only one of several applications that could interact with each other and give the user more of a sense of control. However, the program seems to be only now coming off the back burner, with TechCrunch reporting last month that it has not even hired a project manager yet.

Twitter itself has recently endured hard times financially, losing 12 percent of its stock price – a whopping $5 billion – in a single day after opting to ban then-president Donald Trump from its platform last month. However, the company pulled off a spectacular turnaround on Wednesday, posting its second-ever $1 billion quarter as its share price soared toward a yearly high.

The platform’s “monetizable daily users” fell short of expectations at 192 million, possibly partly due to the huge number of users booted from Twitter as the platform used first the Covid-19 pandemic and then the US election to justify intensified censorship. Nevertheless, its share value has surged 68 percent over the past year, and it has partnered with Google parent company Alphabet to have Google Cloud perform analytics, data processing and other AI functions – a curious and potentially self-destructive move given the numerous antitrust investigations both companies are currently mired in.