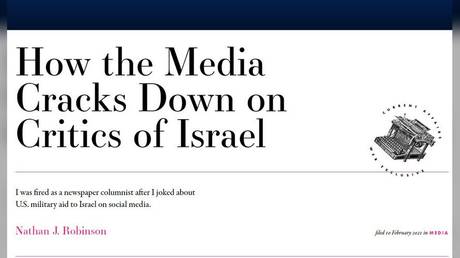 Columnist Nathan J. Robinson has revealed that the Guardian fired him over a sarcastic tweet about US aid to Israel, even though he deleted it and agreed to never bring up the issue in the hope of keeping his job.

“The moment I irritated defenders of Israel on social media, I was summarily fired from my job as a newspaper columnist,” Robinson wrote on Wednesday in Current Affairs, the magazine he edits.

His columns had appeared in the Guardian since 2017, and Robinson says he had only been “spiked for content reasons” once – when he criticized Democrat Joe Biden over his son’s business ties, during the 2020 US presidential election.

One of the most serious threats to free speech is the silencing of criticism of the government of Israel. I have now found this out the hard way, having just been fired as a Guardian columnist for sending a tweet about US military aid to Israel https://t.co/EEfLqjY1IM

What actually got him fired, however, was a pair of tweets criticizing Israel. Angry over the amount of US aid to Tel Aviv in the omnibus spending bill bundled with the coronavirus stimulus back in December 2020, Robinson “sarcastically” tweeted that “it’s the law” that “US Congress is not actually allowed to authorize any new spending unless a portion of it is directed toward buying weapons for Israel.”

In a follow-up tweet, he explained it’s not actually the law, but “at least so customary as to be functionally identical” to make sure it was “100 percent a joke” with no room for misinterpretation.

Then he got an email from Guardian US editor John Mulholland, quoting someone who called the tweets “clearly anti-Semitic” and something that “informs murderous hatred,” demanding the deletion and apology.

Also on rt.com
I’ve been expelled from my barristers’ chambers over a tweet – this shackling of free expression signals the death of democracy


Robinson quickly deleted the tweets and apologized, explaining to his readers that “leftist political writing is not lucrative, and I needed that money.” He also asked specifically for guidance on what he could or could not say, but found that the Guardian “does not have a formal speech code – just an unwritten one.”

After weeks of ignoring him entirely, the Guardian informed Robinson on Tuesday that his column was being discontinued. The embittered author of ‘Why You Should Be A Socialist’ posted screenshots of Mulholland’s emails and lamented the “suppression of critics of Israel.”

You say the wrong thing, you lose your position. No second chances. You will be tarred as an anti-Semite and your job will disappear overnight.

While that is precisely how “cancel culture” works these days, Robinson’s critics were quick to point out that he had insisted just last summer there was no such thing, when it was conservatives being purged over their opinions.

“I think Nathan is deeply disagreeable, but he shouldn’t have been fired over a tweet,” wrote Harper’s columnist Thomas Chatterton-Williams, whom Robinson had criticized over last year’s letter protesting cancel culture. “Freedom of speech only means something if we defend what we dislike.”

A lot of people asking me what I think of Nathan Robinson being “cancelled” by the Guardian. I think Nathan is deeply disagreeable, but he shouldn’t have been fired over a tweet. Not hard. Freedom of speech only means something if we defend what we dislike.https://t.co/weXJwte2Jr

Independent journalist Caitlin Johnstone found humor in the whole affair, saying she was “absolutely shocked and outraged to learn that a journalist as respected and influential as [Robinson] would do something so disgusting and offensive as writing for The Guardian.”

Absolutely shocked and outraged to learn that a journalist as respected and influential as @NathanJRobinson would do something so disgusting and offensive as writing for The Guardian.

The Guardian has yet to react to the allegations made by Robinson. They still list him as a “Guardian US columnist.” His last column, published on December 2, argues that “publishers are not obliged to give bigots like Jordan Peterson a platform,” and that “nobody has a human right to a lucrative book contract without regard for whether their opinions are sound or valuable.”