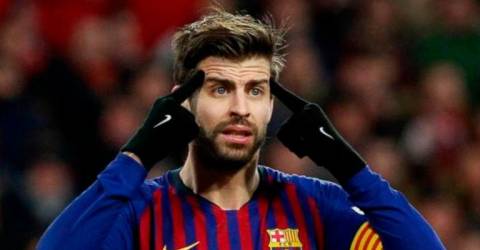 BARCELONA: Barcelona defender Gerard Pique (pix)is facing an investigation from the Spanish soccer federation over comments he made in a recent interview suggesting referees favour Real Madrid because most Spanish referees are Real supporters.

A federation spokeswoman said Barca have been informed of the investigation into Pique, which will determine whether he broke the federation’s rules on questioning the honour or impartiality of referees.

Speaking to Youtube personality Mario Alfonso (known as Dj Mario) earlier this month, Pique said Real’s charge to last season’s title had been aided by refereeing calls, calling the decisions “the most grotesque thing I’ve ever seen in my life”.

The player, who has a penchant for making jibes at Real Madrid, also cited remarks made by former referee Eduardo Iturralde Gonzalez, who said last year that 90% of referees were Real fans, the remaining 10% supporting Barca.

“How are they not going to favour Real Madrid,” Pique said.

“Even if they do it unconsciously, how are they not going to be kinder to one side over the other. I respect referees’ professionalism and I know that they’re doing the best job possible, but when there’s a moment of doubt what will they do?”

Pique’s representatives did not immediately respond to a request for comment.

Cadiz’s president Manuel Vizcaino Fernandez is also being investigated for a statement the club released after Sunday’s 4-1 defeat to Real Sociedad, claiming the club were being treated unfairly by VAR calls. – Reuters