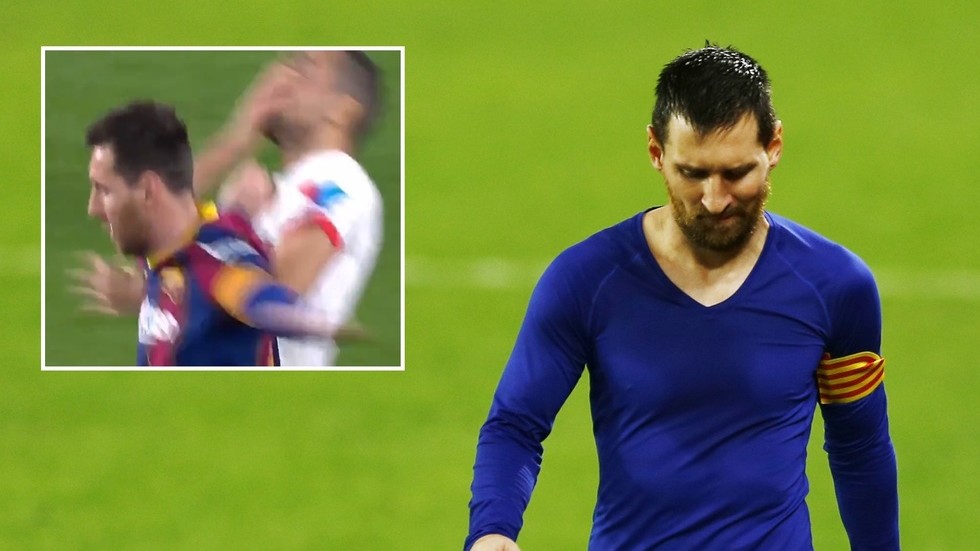 Just one month after his first dismissal in Barcelona colors, Lionel Messi was accused of avoiding another red card as the referee gave the Argentine the benefit of the doubt after he appeared to catch an opponent with his elbow.

The incident, which came in Barcelona’s 2-0 Spanish Cup first leg semi-final defeat to Sevilla on Wednesday evening, saw the frustrated Messi become involved in an off-the-ball incident with reported Arsenal target Joan Jordan midway through the second half after Jordan sent Messi to the turf when the Barcelona skipper ‘nutmegged’ him.

The six-time Ballon d’Or winner reacted after Jordan picked up the ball to prevent Barca from taking a quick free kick, grabbing the ball from the Spaniard – and in doing so, appeared to make contact with Jordan’s jaw with his elbow.

Jordan quickly tumbled to the turf but instead of Messi drawing the referee’s ire, it was Jordan who was issued with a yellow card for delaying the taking of a free kick.

However, some fans claimed the action was worthy of a red card for the Barcelona number 10.

“That’s red, this one is believed to be able to do whatever he wants,” fumed one observer in Spanish.

Messi literally just elbowed Joan Jordan in the face and Jordan was the one to receive a yellow card. Most protected player of all time. 👍🏼👍🏼

@riksharma_ So delicious seeing you cowardly shy away from discussing Messi’s violent shove on Joan Jordan and the referee’s obvious protection of the player. Had it been any other player and he would have seen a straight red. So, so delicious.

I was so confused when I saw this, I saw the ref giving Joan Jordan a yellow card but not Messi. It just doesn’t make sense. https://t.co/ZiscmwNST1

The coming together came just a month after Messi was sent off for the first time in his Barcelona career after he was accused of “punching” Athletic Bilbao’s Asier Villalibre in the final minutes of Barcelona’s 3-2 Spanish Super Cup Final defeat.

The club appealed the decision but Messi’s two-match ban was subsequently upheld by the Spanish FA.

“I can understand what Messi did,” said Barcelona boss Ronald Koeman of Messi’s dismissal last month.

“I don’t know how many times they fouled him, and it’s normal to react when they keep trying to foul you as a player who is looking to dribble with the ball, but I need to see it again properly.”

Speculation remains rampant that Messi’s Barcelona career is reaching its final throes after the player regularly cited as the world’s best attempted to engineer a move away from the Camp Nou last August.


Messi subsequently recanted his wishes after discussions with the Barcelona hierarchy but has again been linked to big-money moves to some of Europe’s most well-off teams such as Paris Saint-Germain and Manchester City.

And judging by the recent examples of Messi’s uncharacteristically aggressive moves, speculation as to his future – and where it will be – is now sure to intensify even further.