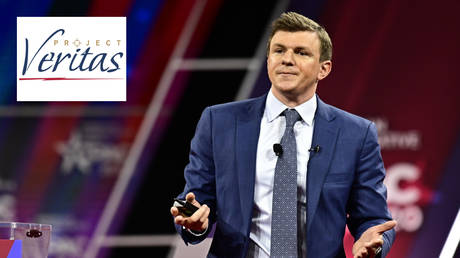 Twitter has reportedly locked conservative watchdog group Project Veritas and its founder, James O’Keefe, out of their accounts after they released a video confronting a Facebook official on his platform’s hate speech policies.

In screenshots posted by Project Veritas to Telegram on Thursday, the group showed that its account and that of founder James O’Keefe had been locked down. According to the screenshots, Twitter claimed that Veritas and O’Keefe had posted a video that violated its rules on sharing “other people’s private information.”

The video in question was published to YouTube on Wednesday and is still available there. In it, Project Veritas journalist Christian Hartsock confronts Facebook’s VP of Integrity, Guy Rosen, apparently outside Rosen’s house.

In the video, Hartsock asked Rosen to comment on leaked footage in which Rosen appears to state that Facebook has “a system that is able to freeze commenting” where “there may be a thread that has hate speech or violence, sort of in the comments.” When confronted, Rosen refused to comment and entered the house.

While Facebook’s rules explicitly prohibit a range of hateful speech, conservatives have accused the platform of unfairly singling them out for enforcement. Facebook was one of several social media companies to suspend then-president Donald Trump last month, with the firm deciding that his calls to contest the 2020 election could “provoke violence.”

Neither O’Keefe or Twitter gave any further insight into what details in the video broke its rules. However, while Project Veritas blurred the registration plates of the vehicles parked in his driveway, the number of Rosen’s house is briefly visible in the clip.

Also on rt.com
Facebook leak: Zuckerberg admits having TOO MUCH POWER but cheers new administration, seeks to WORK WITH BIDEN on key issues


Project Veritas uses leaked video and sting interviews to expose liberal bias in media and tech. The Rosen video is part of a series on Facebook in which leaked footage also shows CEO Mark Zuckerberg admitting that his company has “too much power,” but will use this power to “work together” with the Biden administration “on some of their top priorities.”