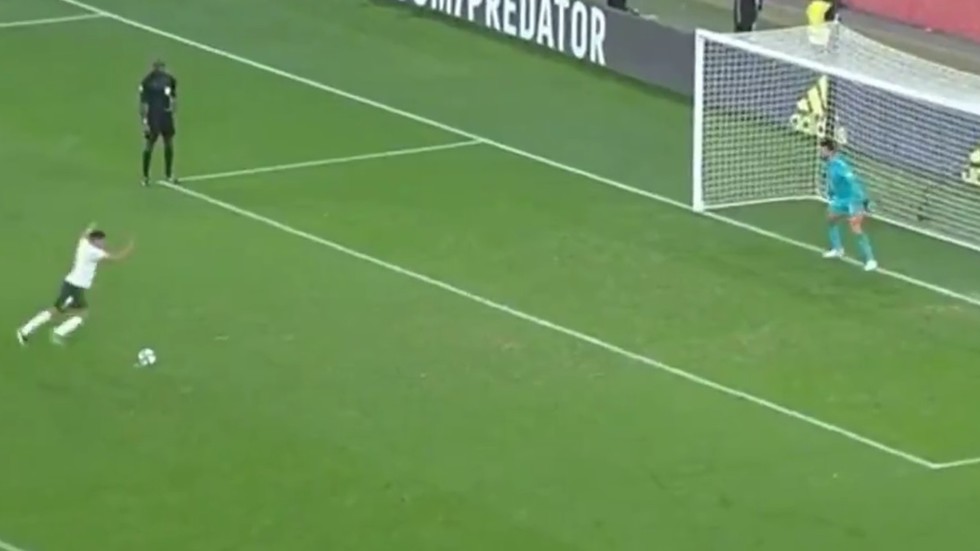 What do you get if combine the spot-kick abilities of the David Luiz run-up, the Jorginho hop and the Paul Pogba shuffle technique? The answer is an absolute abomination of a penalty, as Palmeiras’ Rony has discovered.

Copa Libertadores champions Palmeiras were expected to easily dispatch Egyptian side Al Ahly in Thursday’s third-place playoff of the FIFA Club World Cup but after a scoreless draw in regulation time at the Education City Stadium in Qatar, the match was to be decided by a penalty shootout.

Signs that things weren’t tipping in the Brazilian side’s favor soon became clear though when Brazilian forward Rony began his run-up for the South American side.

Positioning himself around 15 yards from the ball, the 25-year-old first sprinted to the ball before stopping on a dime halfway through – at which point he shuffled the rest of the way towards the ball.

Perhaps seeking additional style points for his fanciful approach, Rony offered some additional flair by performing the “hop step” which has been popularized in English football by the likes of Chelsea’s Jorginho and Manchester United’s Bruno Fernandes.

However, while the Premier League duo more often hit the back of the net with their audacious attempts, Rony instead sent the ball tamely into the arms of Al Ahly goalkeeper Mohamed El Shenawy.

In his head, the plan was probably much better…. so what I’m going to do is backup 20 yards, then hop left 10 yards then do a locomotive and chop my steps or “shimmy”, then stutter step and Bammo!!! Kick it just far enough away to make it close. Awesomeness will ensue. pic.twitter.com/FNFgwalPpZ

Should get a year-long FIFA ban for that, and another year for missing.

The duration of his run-up to the ball was a mammoth EIGHT seconds, after which the player sheepishly walked away with his head down.

Rony’s miss capped a miserable evening for the Brazilian Serie A side, who lost the shootout 3-2 after Luiz Adriano also fluffed his lines from the penalty spot.

As ever, football fans love a good scapegoat though – and after his overly-theatrical performance on Thursday, it is a role that Rony may have to get used to for a while.