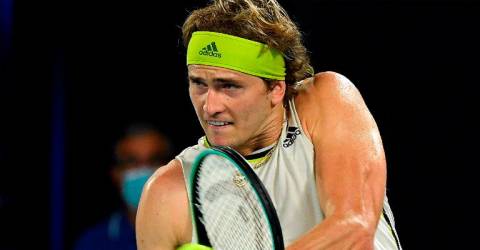 MELBOURNE: German sixth seed Alexander Zverev (pix) put in a clinical display to ease past American qualifier Maxime Cressy 7-5 6-4 6-3 into the third round of the Australian Open on Wednesday.

The US Open finalist got a high percentage of his powerful first services in and never appeared to lose control against his fellow 23-year-old during the final match of the evening session on the Rod Laver Arena.

Zverev was happy to be patient and waited for his chances against his big serving opponent, who approached the net at every opportunity.

He hit six more winners than Cressy, who is ranked 172nd, with 11 unforced errors to his opponent’s 30, breaking the American’s serve once in each of the first two sets and twice in the third.

“He’s a very tricky opponent, so not always easy to play someone like that,” Zverev said. “I know his kind of game very well and I’m pleased to have won.”

Cressy also had his chances on Zverev’s serve but could not convert any of his four breakpoint opportunities.

Zverev converted his second match point when Cressy found the net with his return to set up a meeting with 32nd-seeded Frenchman Adrian Mannarino. – Reuters