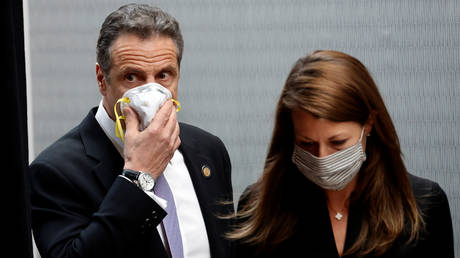 A senior aide to New York Governor Andrew Cuomo has reportedly owned up to concealing the state’s nursing home data amid the coronavirus pandemic, saying the numbers would have fueled attacks from then-president Donald Trump.

The apparent mea culpa came from Secretary to the Governor Melissa DeRosa during a state Democratic Party meeting on Wednesday, where she acknowledged denying a request for the data from the New York Senate last summer because Cuomo’s team feared it would be “used against us,”according to the New York Post.

DeRosa said that around the time of the state Senate’s request for nursing home numbers in August, Trump had turned the issue into a “giant political football” and was charging that Cuomo’s administration had “killed everyone in nursing homes.”

“And basically, we froze,” she continued, adding that at one point, Trump directed his Department of Justice to scrutinize New York’s handling of the outbreak, which she said “played a very large role” in the state government’s decision-making.


Asking for “a little bit of appreciation of the context,” the aide then offered an apology – though not to loved ones of those who perished in nursing homes, but rather to her fellow Democrats for causing them any political headaches.

“So we do apologize,” she said. “I do understand the position that you were put in. I know that it is not fair. It was not our intention to put you in that political position with the Republicans.”

The airing of DeRosa’s candid remarks – based on a recording of the two-hour party meeting obtained by the Post – came just before the Associated Press reported that New York undercounted the number of recovering patients sent to nursing homes by more than 40 percent, citing previously undisclosed records. The revelation only further underscored questions surrounding a controversial directive from Cuomo last March that forced nursing homes to admit Covid-19 patients, despite the risk they posed to the facilities’ aging residents.

“I don’t have enough time today to explain all the reasons why I don’t give that any credit at all,” he said.

Assemblyman Ron Kim, meanwhile, later told the Post that DeRosa appeared to have “admitted that they were trying to dodge having any incriminating evidence that might put the administration or the [Health Department] in further trouble with the Department of Justice.”

That’s how I understand their reasoning of why they were unable to share, in real time, the data. They had to first make sure that the state was protected against federal investigation.

Also on rt.com
Cuomo under fire as probe finds Covid-19 nursing-home deaths in NY were undercounted by up to 50%

“The numbers from the state magically appeared after the attorney general’s report. We want to have the force of law require the disclosure of this data in the future,” said Rivera, who is sponsoring a bill to compel the government to release accurate and timely data.

As of Thursday, the total number of New Yorkers to die in a long-term care facility sits around 15,000.

Addressing the issues raised in the Post report, Cuomo spokesman Rich Azzopardi tweeted a response later on Thursday, arguing that the state administration had more pressing problems to contend with last summer, but is now working with lawmakers to “complete the audit of information they were asking for.”

“We explained that the Trump administration was in the midst of a politically motivated effort to blame democratic states for Covid deaths and that we were cooperating with federal document productions and that was the priority and now that it is over we can address the state legislature,” the spokesman said.