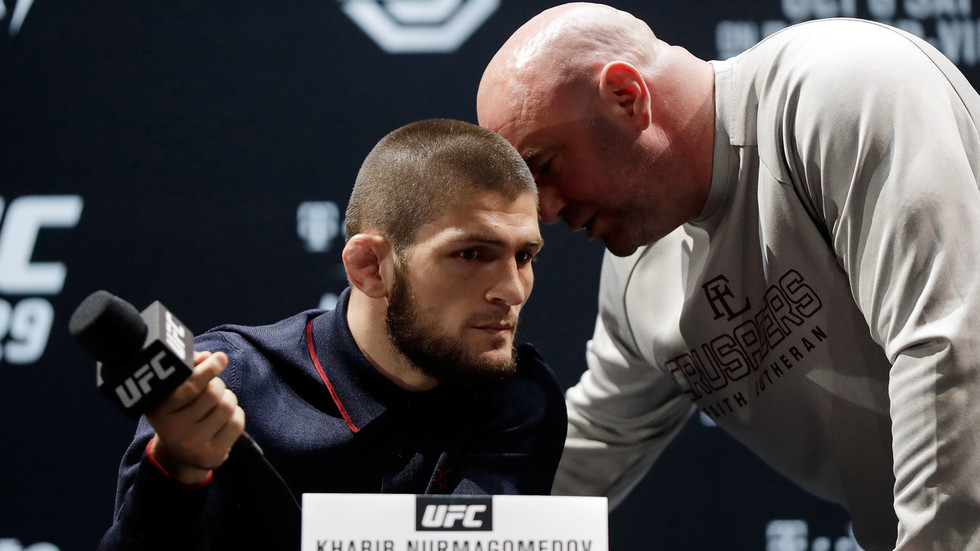 Despite all the noises from Khabib Nurmagomedov to the contrary, Dana White is still reluctant to extinguish hopes that he can lure the UFC lightweight champion back to the octagon.

Khabib repeated earlier this week that his future plans do not involve a reversal of the retirement decision he announced back in October, asserting that the 155lbs division should move on in his absence and naming Dustin Poirier as a worthy heir to the title.


But that message seems to have done little to dent White’s resolve to have at least one more crack at getting the undefeated star to change his mind, with a meeting set for when Khabib jets into Las Vegas later this month.

“Khabib beat Conor [McGregor]. Khabib destroyed Dustin. Khabib is the man. He’s the champ, he’s the guy,” White said when asked on YouTube channel Complex (reported by MMA Fighting) if the UFC had “moved on” from the undefeated Dagestani.

As for Khabib’s tip that Poirier should ascend to the lightweight throne – not least after he dismantled Conor McGregor in the second round of their rematch last month – White counted numerous others as being in contention.

“The one that deserves to be the champion is the one that comes out on top in this tournament,” White said.

“If you look at the guys that deserve to be there it’s whoever’s going to win out of the top 5. You’ve got Poirier, [Justin] Gaethje, [Charles] Oilveira, [Michael] Chandler, and you still have Tony Ferguson and Conor in the mix too.”

Also on rt.com
McGregor and Poirier ‘agree’ to another rematch – but is the UFC’s pursuit of big-money bouts undermining the sport?


That is an exciting talent pool for the UFC’s 155lbs ranks to move forward with, although White signaled again that he was still not done with his attempts to twist Khabib’s arm to remain a part of the discussion.

“No. We have not [moved on from Khabib],” White said. “Khabib is the champion. Khabib’s coming to Vegas. He and I are going to go to dinner and talk and see what’s next.”

On the sidelines of the EFC 33 event in Moscow earlier this week – where Khabib was overseeing the arrival of his newly-acquired MMA promotion to the Russian capital for the first time – Khabib had said that he would be “relieved” to vacate the lightweight title as he focuses on other projects.

“I said my word, I’ve done everything I wanted to achieve in this sport.

“At the same time I understand what Dana wants. He lost that guy, he lost me. And this sport needs fighters who generate big money – he’s in charge of the company and I understand what it’s like to be in that position.

“But I’d like him to understand my position, too…

Based on those comments, it seems White is facing a dead end with his continued efforts to get The Eagle back in a cage one last time.