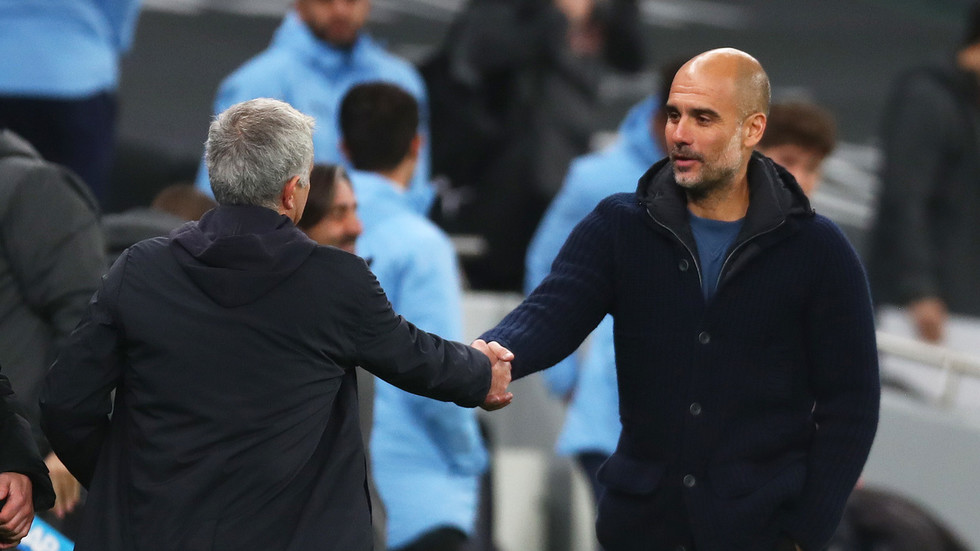 Pep Guardiola has insisted that Manchester City do not feel invincible despite their record winning run, although Jose Mourinho knows it will likely take something special from a shaky Tottenham team to derail them this weekend.

What a difference three months makes. Back on November 21, when Jose Mourinho masterminded a classically clinical 2-0 win for Spurs against Man City in London, much of the talk was about Pep Guardiola’s ailing team staring at a long, hard slog this season.

City were down in 12th in the table and had suffered a 5-2 mauling at Leicester earlier in the campaign. It was even murmured – somewhat sacrilegiously – that the contract extension Guardiola had penned to keep him at the club until 2023 might not be the welcome development it seemed.

As it turned out, that loss in North London was to be a turning point. Since then, Guardiola’s team have embarked on a 22-game unbeaten run in all competitions. Their current winning streak of 15 in a row – extended with a 3-1 FA Cup win at Swansea in midweek – is an all-time record for a top-flight English club.

15 – Manchester City’s current run of 15 consecutive wins in all competitions is the longest in English football history by a top-flight side. Ruthless. pic.twitter.com/hx7TiE4Ksg

It is a remarkable succession of victories which has included particularly swashbuckling wins against Premier League champions Liverpool at Anfield earlier this month and a first-half demolition of Chelsea at the start of January which was so concussive it left Frank Lampard staggering further towards the Stamford Bridge exit.

City host Tottenham on Saturday as a revived, reinvigorated force which stands in such stark contrast to the team who were bruised so badly by Spurs’ sucker-punch football back in November.

So, what has changed for the boys in sky blue?

Inarguably, one standout feature for City has been their newfound defensive resolve. During their 15-game hot streak, City have shipped just five goals – and one of those came against lowly Cheltenham in the fright they gave Guardiola’s team in the FA Cup. In the Premier League, City have conceded just 14 goals in 22 games – eight fewer than Spurs, the team with the next-best defensive record.

In 23-year-old Portuguese center-back Ruben Dias – an old-school defender with a modern hue – City perhaps have the signing of the season. Alongside him, John Stones has been back to his best, while Joao Cancelo has thrived as a defender-come-midfielder, often serving as the font from which City’s fluid football starts flowing.

In midfield, City have coped with the absence of the injured Kevin De Bruyne. Phil Foden is enjoying a breakout season and was imperious against Liverpool. Ilkay Gundogan has helped City make light of Sergio Aguero’s extended spell on the sidelines, contributing a remarkable nine goals in his past 11 Premier League games.

Pretty much everywhere you look, City are back to something approaching the buzzing best that characterized their Premier League title wins in 2017-18 and 2018-19.

Guardiola, of course, takes immense credit for the reversal in fortunes. Even during City’s stuttering start to the campaign, he rightly pointed out that this was shaping up to be a “weird” season, as football is played behind closed doors and head-scratching results (see Liverpool’s 7-2 hammering at Aston Villa) or freak league positions suddenly seem far less anomalous.

Indeed, heading into Saturday’s game at the Etihad, Guardiola could not put his finger on one particular aspect which has helped City click into gear quite so spectacularly since they last faced Mourinho and his men.

“We started to win games and the second and third wins gave us confidence,” the  Spaniard said.

“We saw that we were not far away from the top, but there was not a specific issue. Everyone made an incredible contribution, the backroom staff and players, to realize we had to do better and could do better to fight for the positions in the Premier League.”

That was characteristically gracious of the 50-year-old Spaniard, but Pep surely deserves the lion’s share of the credit for pepping up his team to the extent that they are now five points clear at the top of the Premier League table (with a game in hand on their rivals) and odds-on favorites to reclaim the title.

Their resurgent form is undoubtedly based on individuals returning to their peak, but is also down to Guardiola’s tactical prowess.

Defensive solidity has been accompanied with attacking fluidity; players swapping positions higher up the pitch, creating a moving puzzle that opponents struggle to solve. Foden embodies that as much as anyone, and by some accounts played four different positions in his performance of liquid gold against Liverpool.

City have rediscovered their zip, with their passing looking more characteristic of a Guardiola team and their transitions faster and less predictable.

10 – Phil Foden has now scored 10 goals across all competitions this season; among those in double figures across Europe’s top five leagues, only Erling Haaland (20y 201d) is younger than Foden (20y 255d). Generational. pic.twitter.com/ur98MZoSEb

The one aspect Guardiola has, perhaps, been able to reveal is one he noted in January, when he said he had told his team to “run less.”

Those seems particularly wise words given the intensity of this most congested of seasons.

On Saturday, Guardiola comes up against his old enemy Mourinho, the man so often held up as the antithesis of all that the Spaniard stands for in football terms, but who got the better of him with that surgical Spurs’ win in November.

Coming off the back of their 5-4 FA Cup defeat to Everton in midweek, and having lost three league games on the bounce before stopping the rot against West Brom last weekend, Spurs are now the ones looking distinctly ropey. Eighth in the table and four points adrift of the top four, they will be desperate to return with something this weekend.

Mourinho knows, however, that with City in this kind of formidable form, a result will not be easy.

When Guardiola was asked whether his team felt invincible given their current run, he dismissed that idea, saying: “We are not [unbeatable]. 15 games in a row winning doesn’t help us to start 2-0 up before the start of the game.”

It might not put them 2-0 up on paper, but it surely gives them a psychological edge against a fragile Spurs team whose defensive confidence will have been further dented by the horror show at the back against Everton.

November’s win in London was an example of a “perfect” Mourinho game plan coming off against City – but this time they will face an altogether different prospect against a Guardiola team brimming with confidence and vigor.

It will take something even more special from Spurs this time to keep City at bay, and to halt the momentum of a juggernaut which looks ominously like rolling on towards the Premier League title.