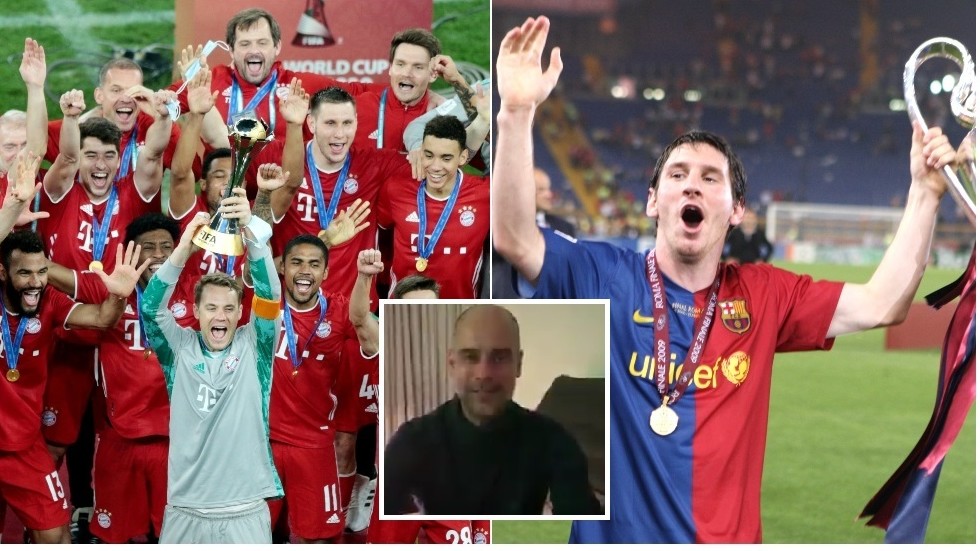 Pep Guardiola has challenged former club Bayern Munich after they picked up a remarkable ‘sextuple’ of titles, matching the feat achieved by Guardiola’s iconic Barcelona team of 2009.

Bayern beat Mexican club Tigres UANL in Qatar on Thursday to add the FIFA Club World Cup title to their staggering trophy haul for the 2020 season.

In the space of less than nine months, Hansi Flick’s team have won the Bundesliga, both domestic cups in Germany, the UEFA Champions League and UEFA Super Cup, and have now been crowned world champions.

They are only the second club to achieve the feat, matching the clean sweep by the iconic 2009 Barcelona team led by Guardiola in the dugout and inspired on the pitch by the likes of Lionel Messi, Andres Iniesta and Xavi.

Current Manchester City manager Guardiola – who was at the helm at Bayern between 2013 and 2016, winning a hat-trick of Bundesliga titles as well as the UEFA Super Cup and FIFA Club World Cup – congratulated his former club, and jokingly suggested a showdown of the ‘sextuple’ teams to determine the greatest of all time.

“Big congratulations to all the Bayern family for this incredible success, to be the Club World Cup champions and especially to win six titles,” the 50-year-old said in a message shared on the Bayern Twitter account.

“We are so proud, I am so proud, a big congratulations for everyone, especially Hansi, the players and the backroom staff for this amazing thing.

“But I would like to say to Hansi that you are the second team to win the six titles in a row!

“Before you, there was another team, Barcelona… so maybe I can call Messi and company and we can play for the seventh title? Tell me when and where and we will be there!”

Thursday’s victory – which came courtesy of a second-half Benjamin Havard goal – continued Flick’s incredible record in his 14 months in charge at Bayern.

Remarkably, the 55-year-old has won more trophies than he has lost games, and averages a title every 11th match.

Hansi Flick since taking over as Bayern manager:▪️ Won six trophies including the treble in his first season▪️ 85% win record▪️ Averaging a title every 11 games▪️ UEFA Men’s Coach of the Year▪️ More trophies (6) than defeats (5) pic.twitter.com/oSCqsHTq86

Bayern are on course for another Bundesliga title this season, standing seven points clear at the top of the table. However, they will not be crowned DFB-Pokal (German Cup) champions after suffering a shock exit to second-tier Holstein Kiel in January.

In the Champions League, their title defense continues against Lazio in the last 16, with the first leg in Italy on February 23.