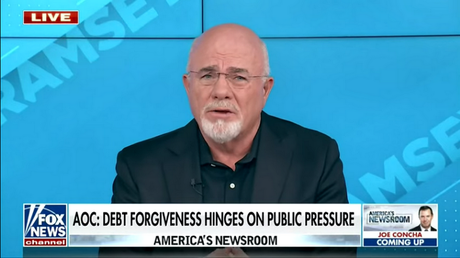 Radio host and financial pundit Dave Ramsey set off a bout of controversy after arguing that those relying on stimulus checks amid the Covid-19 pandemic were “already screwed” and may suffer from mental issues.

“I don’t believe in a stimulus check,” Ramsey told Fox News’ Bill Hemmer during a Thursday interview when asked how much the government should devote to relief payments, comparing the checks to “peeing on a forest fire.”

While Ramsey noted that he’s been “broke” at various points in his life and wasn’t “talking down to folks,” many observers online took his comments as just that, blasting the multi-millionaire financial advisor for lecturing those struggling to get by, especially in the face of government shutdown policies.

“Imagine being out of work for almost a year, struggling to find a new job cuz of government mandated lockdowns, and now you can’t easily get food, and some prick jumps in to tell you that a stimulus isn’t important cuz you should have saved money better,”wrote journalist Sophia Narwitz.

“Other problems” such as a global pandemic which has put people out of work and now they’re struggling to afford food or other essential items? Oh, no. You’re just going to be a prick who talks down to ‘the poors.’ Fuck off. This money is vital to a lot of people right now. pic.twitter.com/z56zwWvxnG

So much of what he said is true, but now is not the time for a lesson in economics or “believing” in a stimulus check. People are are starving, fucking pay them. We can worry about their budgeting skills when they go back to work.

Dave Ramsey’s financial advice in a nutshell: already be rich

Some countered that the critics had missed the point, saying there are broader economic problems at work and that stimulus checks – even the $1,400 payments proposed by President Joe Biden – cannot offer a simple fix.

So many ppl missed Dave Ramsey point. Basically there’s an underlying problem ppl have that needs to be addressed if the difference of $600 to $1400 is a life changer.

Does anyone understand what he’s really saying is that if you’re sitting around waiting for a stimulus check, the bigger issue is that you’re financial situation wasn’t in a good place to begin with. Not saying a stimulus check wouldn’t help, but there’s a bigger issue going on