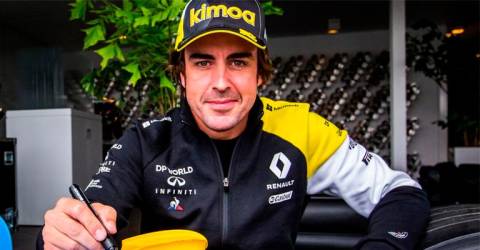 SWITZERLAND: Spanish Formula One driver Fernando Alonso (pix) underwent an operation for a fractured jaw and will remain under observation for the next two days following a road accident while cycling in Switzerland, his Alpine team said on Friday.

The 39-year-old double world champion, who was involved in the accident on Thursday, is due to make his Formula One comeback this season after two years out of the sport.

“Following his cycling accident yesterday Fernando Alonso was kept under observation in hospital in Switzerland,” a team statement said.

“Medics discovered a fracture in his upper jaw and conducted a successful corrective operation. The attending medical team are satisfied with his progress.

“Fernando will remain under observation in hospital for a further 48 hours.”

Italy’s Gazzetta dello Sport newspaper reported on Thursday that the Spaniard, a keen cycling fan, had been hit by a car while training on his bike near his home in Lugano.

Alpine, formerly known as Renault and renamed after the French manufacturer’s sportscar brand, said they expected Alonso “to be fully operational to undertake preparation for the season”.

The Formula One championship is due to begin in Bahrain on March 28, with pre-season testing in the Gulf kingdom from March 12-14.