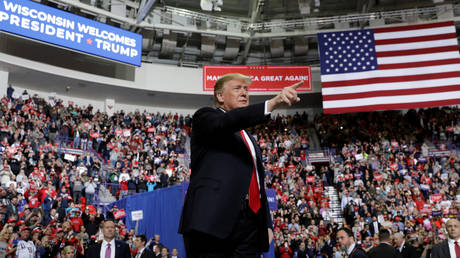 Former President Donald Trump appeared emboldened by being acquitted in a Senate impeachment trial for a second time, making clear that he will seek to remain a major political force in the times to come.

Trump denounced the impeachment as “yet another phase of the greatest witch hunt in the history of our country.” He thanked his lawyers and the supporters who backed him through the Democrat effort to block him from ever seeking office again. The 74-year-old stopped short of saying that he will run for president in 2024, but he said the “Make America Great Again” movement has “only just begun.”


“In the months ahead, I have much to share with you, and I look forward to continuing our incredible journey together to achieve American greatness for all of our people,” Trump said in a statement immediately following Saturday’s Senate impeachment vote. “There has never been anything like it.”

Trump statement makes clear he’s not going away: “Our historic, patriotic and beautiful movement to Make America Great Again has only just begun. In the months ahead I have much to share with you…” pic.twitter.com/vOCD30rTqW

House impeachment managers failed to achieve the two-thirds majority needed to convict Trump over his alleged incitement of the January 6 Capitol riot. The Senate voted 57-43 on Saturday in favor of impeachment, falling short of the 67 votes needed.

Democrats managed to win two more Republican votes than when the Senate voted in late January to go forward with the trial, rejecting a motion by Senator Rand Paul (R-Kentucky) alleging that it would be unconstitutional to seek to convict Trump after he had left office, becoming a private citizen.

The five Republicans who voted to hold the trial — Mitt Romney (Utah), Susan Collins (Maine), Lisa Murkowski (Alaska), Ben Sasse (Nebraska) and Pat Toomey (Pennsylvania) – also voted to convict Trump. They were joined by Bill Cassidy (Louisiana) and Richard Burr (North Carolina). Toomey and Burr have announced plans to retire, so they won’t have to face the prospect of Trump’s campaigning against their re-election in 2022.

There were reports that Trump mulled forming a new political party, but these speculations were put to rest after the ex-president met late last month with House Minority Leader Kevin McCarthy (R-California) and agreed to help the party take back control of Congress in the 2022 mid-term elections.

Also on rt.com
The same abhorrent Republican neocons whose treachery gave rise to Trump are talking of forming a new party because of Trump


With Trump’s stranglehold on the GOP apparently set to continue, anti-Trump establishment Republicans have discussed starting their own breakaway party. About 120 former officials of the Ronald Reagan, George H.W. Bush and George W. Bush administrations met remotely last week to discuss the idea of forming a third party.]

The Capitol riot clearly eroded Trump’s support. Forty percent of Republicans and GOP-leaning independents in a Politico/Morning Consult poll released one week after the debacle said they would favor Trump if he sought the party’s nomination for president in 2024, down from 53 percent in November. He remained a frontrunner, though, as former Vice President Mike Pence had the second-most support, at 18 percent.