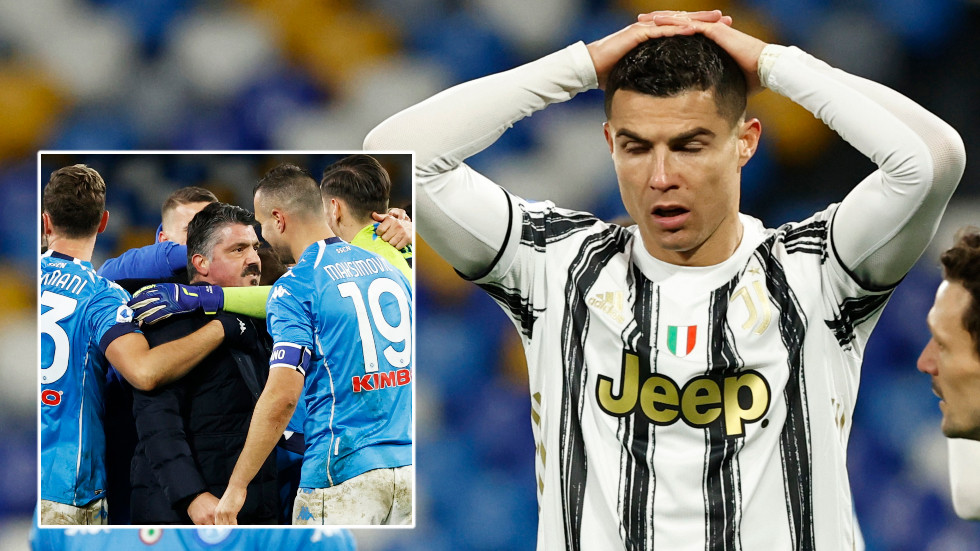 Cristiano Ronaldo was accused of going missing against top clubs in the Italian top flight after his wretched run against leading sides continued, failing to score from eight shots as Juventus’s title hopes took a major blow.

The reigning champions’ promising run of three successive league wins ended on Saturday at Napoli, where Ronaldo continued his record of not having found the net against any of the top four sides in Serie A matches this season as part of a frustrating 1-0 defeat.

Top scorer Ronaldo copped an avalanche of derision after a 48th-minute close-range miss that many felt would have been easier to score than send towards grateful home goalkeeper Alex Meret.

Juve’s string of victories was much-needed after their inconsistencies in the first half of the season saw Andrea Pirlo’s side fall short of the top four. They have since risen to third, but their latest setback allowed their hosts to move two points behind them.

Let’s talk about how Ronaldo missed 3 sitters and Juventus are now in real danger of not winning the league for the first time in 10 years.

Ronaldo disappearing in a big game again 😭😭 Don’t get me wrong, he is still my idol, but he offers nothing to the team but penalties

Leaders Milan are now seven points ahead of Juventus and could extend that lead when they travel to lowly Spezia later on Saturday, although they will have played a game more than their rivals by full-time.

23-year-old Italian Meret was in inspired form as Juventus had the better of the match and laid seige to his goal in the closing stages, attempting to overturn a deficit provided by Napoli captain Lorenzo Insigne’s 31st-minute penalty.

The goal was the 100th for the club by the Italy forward, who joined his teammates in exuberant celebrations at the full-time whistle as they congratulated under-pressure manager Gennaro Gattuso.

Every time Ronaldo touches the ball, it’s either;A) Simple pass to open teammate on either side of himB) Run straight down to wing and cross it directly into the first defender orC) Get tackled immediately and kill our attacking momentumHe is just a poacher on the pitch

Juve were never going to win the title, but Ronaldo and pirlo hype made people believe for a second LOL.They have nothing going forward and just isolate Ronaldo and hope for the best.

Ronaldo, meanwhile, was savaged on social media after firing a fourth blank in five league matches.

“They have nothing going forward and just isolate Ronaldo and hope for the best,” said one unimpressed viewer.

“Juve were never going to win the title,” added another. “But the Ronaldo and Pirlo hype made people believe for a second.”

Also on rt.com
Watch out, ref: Cristiano Ronaldo bags for Juventus against Roma – then grabs for official’s arm as he asks to check goal (VIDEO)