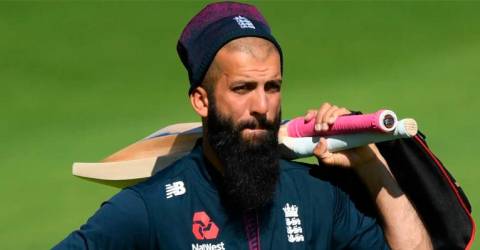 CHENNAI: The ball with which England’s Moeen Ali (pix) bowled India’s Virat Kohli for nought on Saturday was “world class” fellow spinner Jack Leach said at the close of the first day of the second Test.

Ali,recalled for this Test, deceived the Indian captain with a perfect off-spinners’ delivery that pitched outside the off stump and spun sharply between bat and pad.

Kohli stood in disbelief. He even asked Rohit Sharma, who made 161 in India’s total of 300 for six, at the other end whether the bail came off the wicketkeeper’s glove.

The TV umpire confirmed the ball hit the stumps and Kohli walked back to a stunned silence from a crowd that returned for the first time to Indian grounds in the pandemic.

“It was great to see Moeen do that. It was world class. That was a world-class delivery,” Leach told reporters.

“The ground went silent which is nice to do out here. It was my first experience of an Indian crowd and I have never heard noise like it when he (Kohli) came to the wicket. And then it went very quiet when he got out.”

Ali, who missed England’s 2-0 sweep in Sri Lanka after catching the coronavirus, and Leach claimed two wickets on a day when England fought back in the final session.

Ali replaced Dom Bess as one of the four changes in the England XI from the opening win in the four-Test series and, Leach said, “got better and better as the day went on”.

Leach took Sharma’s wicket to break a 162-run fourth-wicket partnership with Ajinkya Rahane, who made 67.

Leach said partnerships count and England will be looking to do the same in their reply.

“As you saw with Rohit Sharma and Rahane, that once you get a partnership going with that older ball it can get a little bit easier,” said Leach.

“So we have to certainly believe that we can do the same when we come to bat.”

“Rohit played a serious knock. He is obviously a world-class player,” said Leach. “I didn’t enjoy it, but he obviously batted well.”

England are on a roll with six away wins and Leach said his team’s adaptability is their key to success.

“I think that back in Sri Lanka we were playing on some spinning wickets and I think the lads have adapted really well to different surfaces,” said Leach. “So our full belief is that we can do that as well.” – AFP