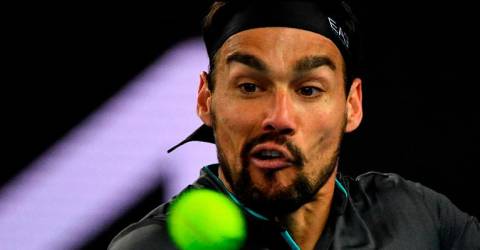 MELBOURNE: Italian 16th seed Fabio Fognini (pix) put in a clinical performance to stroll past Alex de Minaur 6-4 6-3 6-4 into the fourth round of the Australian Open on Saturday, ending the host nation’s challenge in the men’s singles draw.

Two days after saving a match point to beat compatriot Salvatore Caruso in five sets, the 33-year-old Fognini raised his level a notch in his first meeting against the 21st seed De Minaur, the highest-ranked men’s player in Australia.

With Victoria entering a five-day lockdown from Saturday to contain the spread of COVID-19, there were no home fans present at the Margaret Court Arena to bolster De Minaur’s spirits or his performance as Fognini proved too strong.

“I knew since the beginning that it was going to be a really tough match,” Fognini said in his on-court interview. “Tonight it was better for me without a crowd, of course. He is Australian, it was tough.

“He is really young. I am almost 34, so for sure he is a really good player, already top-20. He has everything to improve.”

Fognini, who underwent arthroscopic surgery on both ankles last year, crunched one winner after another from his double-handed backhand and aggregated 25 in all compared with 13 for his opponent.

A few errors crept into his game towards the end when De Minaur saved two match points to win a break back, but the Italian was not to be denied on the third and he sealed the contest with a strong serve.

“I played a really solid match,” Fognini added. “I got a bit tired at the end of the match, but I think it is normal. I need these kind of matches.”

Fognini broke De Minaur’s serve five times across the three sets while conceding two breaks on his own.

Next up for the Italian will be 20-time Grand Slam champion Rafa Nadal, who eased past Britain’s Cameron Norrie with a 7-5 6-2 7-5 victory in Saturday’s other late match. – Reuters