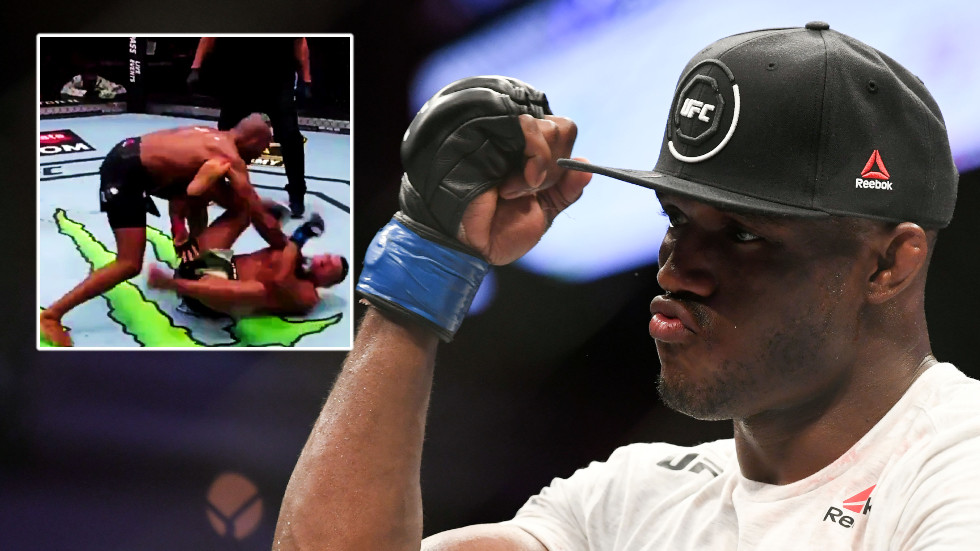 Kamaru Usman’s third-round TKO defeat of Gilbert Burns at UFC 258 means that the ‘The Nigerian Nightmare’ has now put together the longest undefeated run in UFC welterweight history – but he had to survive an early scare to do so.

There was always going to be an extra dynamic to Saturday night’s UFC headliner in Las Vegas, given that 170lbs champion Usman and Burns had spent countless hours training on the mats together as sparring partners.

Much had been made in the lead-in as to who this would benefit but as soon as the first bell rang – and without the customary glove-touch – it was the challenger who sprang out of the blocks.

Burns, the fighter best known for his clinical submission skills, has shown evidence of adding a robust striking game to his arsenal in recent fights and that was once again on display, dropping the champ with a pinpoint overhand right in the first real exchange of the fight.

Burns added another solid shot which visibly hurt Usman but the champion quickly regained his composure, halting the Brazilian’s assault.

Burns’ emergence as the number one contender led, in part at least, to Usman’s departure from his longtime coach Henri Hooft, choosing to train with famed striking coach Trevor Wittman – and during that time he has clearly worked on his jab, as he peppered Burns with quick shots while his opponent head-hunted for power strikes.

The toll on Burns soon began to rise and momentum swung in Usman’s favor. Burns, by now on wobbly legs, couldn’t take much more and in the end it was another of those jabs which collapsed him, leading to the referee stepping in seconds later.

The win breaks new ground for Usman in the UFC welterweight division, as he eclipses Georges St-Pierre’s record for 12 consecutive wins in the weight class and enhancing his reputation further as one of the best 170lbs fighters in UFC history.

“This one was a tough one,” Usman admitted afterwards. “It was a very, very tough one. The whole gym situation with me leaving, first and foremost, you cannot discredit what Gilbert Burns has done in this division.

“We started together. He showed it tonight. But I said it, I’m the varsity guy. My fight IQ is different.

“There was no friends in there. No friends at all. I am the best on the planet for a reason. You need to put some respect on my f*cking name.”

Afterwards, Usman called for a rematch of his title defence against former foe Jorge Masvidal, who had been speaking to the media in recent weeks about the prospect of facing Usman “with a full camp”.

“We got this little street thug call himself Jesus, thinking he’s Jesus,” Usman said. “They tried to make that fight but he kept backing out.

“The only reason this man took the fight is because it was on six days’ notice and he had a built-in excuse. And he’s still running his mouth talking.

“Guess what? It’s not done. I’ll give you a whole training camp. I guarantee you won’t sign on that dotted line because this time I’m going to finish your ass.“

One thing is for sure after Saturday night. If Masvidal – or anyone else for that matter – considers themselves as the best welterweight in the world, they’re going to have to go through Kamaru Usman to prove it.

Also on rt.com
UFC 258: Despite Dana White’s theory he might soon be MMA’s GOAT, Kamaru Usman has some way to go to be considered the best