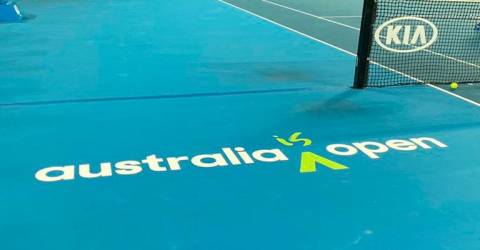 “Tonight was something I have never experienced before, it was new. I almost had to cut myself some slack and give myself the time to get used to it and adjust to it.” – Ash Barty on playing without spectators.

“I just like sugar … sweet desserts, tiramisu, panna cotta, anything. I don’t eat sugar during the tournament and I’ve got five cakes in my room. After the tournament it’s going to be a big fight with the cakes.” – Daniil Medvedev on his love for desserts.

“I might watch them a little bit on TV if it happens that the TV is on or the right channel is on. Otherwise I just switch to History Channel.” – Stefanos Tsitsipas, when asked if he plans to watch title favourites Novak Djokovic and Rafa Nadal in action.

“Zero. To be able to play at this level at her age is admirable, both her and Venus… Once I have children, I don’t think I’ll be out here grinding.” – Jennifer Brady, 25, on the odds of her still playing at the same level as Serena Williams when she is 39.

“If it was in my power to choose opponents, then yes, I would think who I would like,(and not) face friends. But if I cannot control it, I don’t want to lose time to think about it.” – Andrey Rublev after beating long-time friend Feliciano Lopez.

“It’s my kind of way of dealing with the quarantine … I like to share with people. If I can make your day or make you smile, that makes me happy.” – Elina Svitolina on engaging with fans on social media during quarantine in Melbourne.

“I don’t want to be too sarcastic and too negative because I just lost.” – Karolina Pliskova when asked if she needs to fine-tune aspects of her game after her third-round exit.

“Since everyone has to wear it, we tried to make it that people can actually buy them on my website. It goes to charity for sick little kids from my hometown. Everyone who get one with my signature is doing a good thing and helping a kid.” – Karolina Muchova on releasing new face masks featuring her signature.

“I’m surprised I did it this year with the courts being so fast. I don’t like this trend of Grand Slams making their courts faster and faster, but maybe I’m going to start liking it from now on.” – Donna Vekic on reaching the Australian Open fourth round for the first time.

“It doesn’t make that much of a difference to me because I’m not really used to playing in a big stadium with tons of fans like every single match, like some of the top players are.” – Jessica Pegula on playing her third round match without fans in attendance.