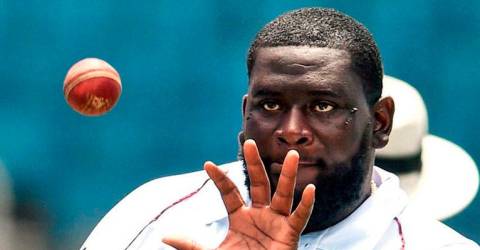 DHAKA: Bangladesh’s spinners took late wickets to give them a glimmer of hope after Rahkeem Cornwall’s (pix) maiden five-wicket haul gave the West Indies a healthy 113-run first innings lead in the second Test in Dhaka on Saturday.

The visitors finished the third day with 41-3 in the second innings, stretching their lead to 154 runs.

Nkrumah Bonner was on eight along with nightwatchman Jomel Warrican, two not out, as the West Indies looked to set a target for the hosts on the fourth day.

The West Indies owed their advantage to Cornwall, who finished with 5-74 helping as Bangladesh were bowled out for 296 an hour into the final session on the day.

Liton Das, Mehidy and Mushfiqur Rahim earlier hit fifties to rescue the Bangladesh innings in reply to the West Indies’ 409 runs in the first innings.

Cornwall dismissed Liton for 71 to break his 126-run seventh wicket stand with Mehidy after the pair helped Bangladesh recover from 155-5.

Resuming on 105-4, Bangladesh – who must win the game to avoid a series defeat – earlier pinned great hopes on Mushfiqur, their most experienced batsman.

But he threw away his wicket by attempting a reverse sweep off Rahkeem Cornwall after completing his fifty off 89 balls.

Left-arm spinner Razzak, who played 13 Tests and 153 one-day internationals and 34 Twenty20 internationals, was recently named as a member of the selection committee.

Shahriar, who played 24 Tests, 75 ODIs and a T20 international, will join the Bangladesh Cricket Board as assistant manager for cricket operations.

The West Indies won the first Test in the two-match series by three wickets. – AFP