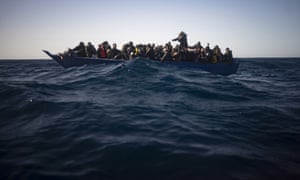 After witnessing abuse and discrimination, Sherif Targi*, 21, decided to leave Libya for Europe.

“I saw killing and massacres because of the conflicts between Tuaregs and the Tebu [ethnic minorities],” he says.

Targi is a Tuareg from the desert city of Ubari in Libya’s south-west. Under Muammar Gaddafi, Tuareg people were marginalised – not issued government IDs, and restricted from getting work and public services. Things didn’t improve after the dictator was ousted.

In October 2019, Targi left home, travelling more than 600 miles (1,000km) to the coastal city of Zuwara. From there, he and about 200 other people, mainly Syrians, Moroccans and Sudanese, crammed themselves on board an overloaded wooden boat, and set off on a dangerous 18-hour journey.

A decade after Libya’s revolution, an increasing number of people are making the perilous journey out of Libya by boat. At the end of December, the International Organization for Migration (IOM) had registered 386 Libyans arriving in Italy by sea in 2020, almost double the number that arrived in 2019. The UN High Commissioner for Refugees recorded a 52% increase of Libyans arriving in Europe, compared with 2019.

Safa Msehli, a spokesperson for the IOM, says the rise in numbers is significant, as it changes Libya’s position in relation to the migration chain. “Libya has always been a transit country for migrants.”

A weak economy further crippled by the coronavirus pandemic is helping to fuel the exodus.

“The pandemic has made the economy suffer, and has led to a reduction of oil and gas exports. There is also difficulty for Libyans to cash out their pensions, and there’s a huge rise in unemployment among youth,” says Vincent Cochetel, the UNHCR’s special envoy for the western and central Mediterranean.

Border closures and limited movements because of Covid-19 lockdowns have affected people’s ability to earn, he says. “They depended on border trade and smuggling things like cigarettes and fuel to get by.”

Cochetel predicts a continued rise in Libyans leaving the country in 2021, unless the economy improves. “Libyans tend to stay in their country, even as displaced persons, or seek help from relatives in Tunisia or in Egypt,” he says. “But the socioeconomic impact of the recent devaluation of the Libyan dinar must be monitored.”

Mousa Algunaidi, of the Nedaa Organization for Human Rights and Community Development, in Misrata, says corruption inside the various state apparatuses in Libya – divided between two rival governments based in Tripoli and Benghazi – imperils basic services such as electricity supply, and has eroded Libyans’ trust in the state.

He adds: “There are a lot of security fears for Libyans in cities like Tripoli, Sirt and cities of the south like Murzuq. Additionally, there are rapidly rising prices and inflation, with banks and the finance ministry limiting cash withdrawals to between 500 and 1,000 Libyan dinars [£280–£560].”

Algunaidi believes there is hope for Libya if all parties stick to the comprehensive peace deal signed by the country’s two warring governments in October. But Libya’s defence minister has already threatened to withdraw from the agreement.

If there’s a new conflict like we saw in 2014, the shores will be full of Libyans

“If there’s a full political agreement and elections and the creation of a new constitution, the peace agreement will benefit us. This would definitely decrease the number of Libyans leaving by sea. It could even stop emigration completely. But if there’s a new conflict like what we saw in 2019, we’ll see the shores full of Libyans,” he says.

After hours at sea, an Italian coastguard vessel picked up Targi’s boat and he finally reached Italy. “There was nothing harder than this trip. The boat was old. We were overloaded, at sea for two days. The motor was weak. If the coastguard didn’t find us, we would have died,” he says.

After being smuggled into France, Targi took a train to Belgium, where he stowed away on a truck to the UK. He made it across the Channel, and settled in London, where he now studies science at college.

Friends back in Ubari say the city has gone from bad to worse. Targi’s childhood friend, Mahmoud Twareg*, says it remains a place of stifled opportunity, and danger.

I don’t expect life to improve in Ubari. So I won’t be going back any time soon

“The schools are in bad shape without enough teachers. Hospitals lack enough staff and functioning equipment,” says Twareg. “Security is lacking. There are armed groups and gangs everywhere.

“The peace agreement is not improving things at all in Ubari. Nothing has changed. The forces of [warlord general Khalifa] Haftar have even come back.”

Targi believes that even if the deal holds elsewhere in Libya, and the country puts war behind it, his life will remain far away from home. “I want to finish my studies. I don’t expect life to improve in Ubari. So I won’t be going back anytime soon.”

* Names have been changed

Sign up for the Global Dispatch newsletter – a fortnightly roundup of our top stories, recommended reads, and thoughts from our team on key development and human rights issues: