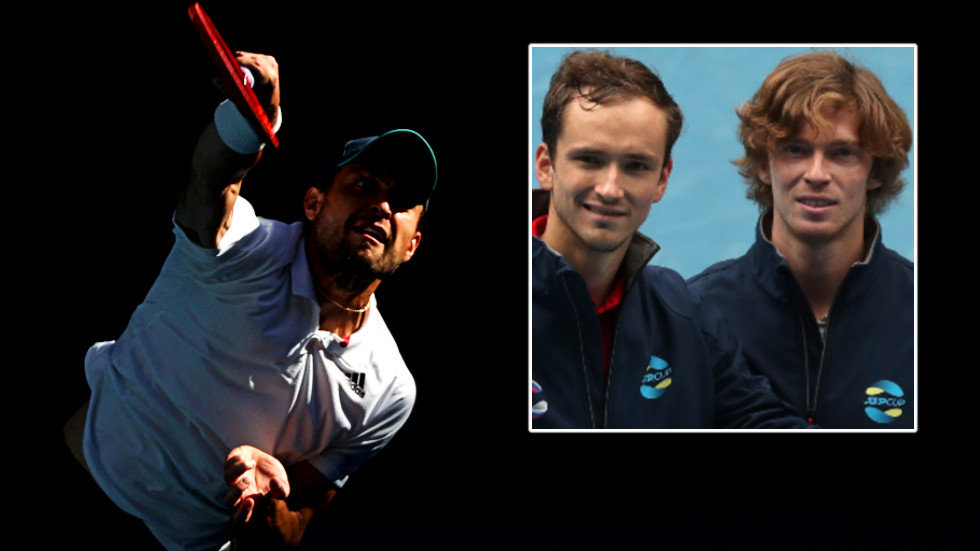 Launched under a cloud of acrimony and played out in echoing, empty arenas, this year’s Australian Open has been sorely lacking in sparkle. We should be grateful to three record-setting Russians for providing some missing magic.

Novak Djokovic warned that he might not make the second week of the tournament. Medics could have been forgiven for mistakenly visiting Rafael Nadal during a match after persistent whispers around his fitness, even though they insisted they had got the court rather than an assumption wrong.

Dominic Thiem knocked out clown prince Nick Kyrgios – a figure who, with all his thuggish emotional incontinence, could have at least played the pantomime villain had he made it to the latter stages for once – before departing himself after being physically below par.

Alex Zverev and Stefanos Tsitsipas are through to the quarterfinals, but the “next gen” tags they have had for at least two years hardly gives them an underdog air of allure as they make their latest attempts to justify the hype by seeing off a top-three player and winning a Grand Slam.

So as welcome as it is for fans to see top-level tennis taking place at all in this strangest of situations, the Russian revival that is blossoming in Melbourne is an enormous relief for organizers and viewers who had hoped that this would be a tournament that could overcome its constraints and capture the imagination.

There are a couple of fairytales in the women’s draw, among the top-seeds-and-Serena headlines. The best of them is Hsieh Su-Wei, the 35-year-old who has become the oldest professional in the Open era to debut in the quarterfinals.

Hsieh has pragmatically predicted that former champion Naomi Osaka will “smash” her. Osaka was almost certainly genuine when she admitted that she is not looking forward to taking on the joyfully unpredictable veteran. But the two players who might fancy playing each other least on Tuesday – and the much-needed David-against-Goliath – again involves the lowest-ranked remaining man by a mile.


Aslan Karatsev doesn’t seem the kind of character to admit it, but he will surely be devastated if his tournament ends now. Having beaten world number nine Diego Schwartzman in straight sets, the 27-year-old who went through three qualifiers in Doha to even enter the gates in the first place eventually made fairly light work of 20th seed Felix Auger Aliassime, winning the final three sets of their fourth-round match in routine fashion.

On the other side of the court, Grigor Dimitrov must know that he is unlikely to emerge with much credit irrespective of the result. The 19th seed trounced the ailing Thiem and is the lowest-ranked opponent Karatsev could have faced at this stage, with no neutrals wanting him to reach a semifinal with Djokovic, against whom he has lost nine out of ten matches, including his last seven.

Tennis players’ social media accounts are usually as dull and insightless as a day’s play delayed by rain. Dimitrov’s, astutely, is usually based around endorsements for the eyes of his Instagram following of almost a million.

Also on rt.com
‘Can you just let me play?’: Medvedev claims coach was ‘sure’ he would win despite bailing as he suffered Australian Open meltdown


There may be close-ups of branded watches and multivitamin drinks in the near future, yet Karatsev’s is unwittingly refreshing for now: his Twitter following of little more than 1,000 at the end of last week was less than some of his casual fans, and a photo with his dog, taken as his most recent Instagram photo almost a year ago, manages to come across as an almost perfect opposite to the heavily-stylised hallmarks of the mega-famous.

Karatsev gives off a faintly naive charm and a guardedness that seems a product of his story so far. His successful career has never threatened the pinnacle of the elite, and he changed coach, had an injury lay-off and did not play for months after starting last year at 263 in the world.

The low-key support act could probably have snuck off without anyone noticing while Daniil Medvedev and Andrey Rublev took the media spotlight following Russia’s ATP Cup win earlier this month, although they cheerily described him as their secret weapon after their singles supremacy meant he was not required for decisive action.

Journalists eager for a soundbite from Karatsev after his win over Aliassime were largely frustrated. There have been few superlatives that could have added to his sensational results so far, so he has tended to deal in bemused shoulder shrugs, coy smiles and matter-of-fact reflections on his “amazing” run.

Top-ten stars Medvedev and Rublev are not ones to wax lyrical in the style of Djokovic, Nadal or Federer, either. Part-time pop star Rublev took fans and an interviewer aback with the unusual step of politely returning an enquiry about his day on court, and Medvedev has described the Serb and Spaniard as the Messi and Ronaldo of the modern game.

When the two friends and countrymen meet in their quarterfinal, they will reignite a rivalry that began when, as Rublev has put it, they were “crazy” juniors who smashed up rackets on court in their desire to drive each other on and reach the position they are in now.

That remained in evidence when Rublev raged against his racket and assaulted a banana during his third career defeat out of three to Medvedev at this stage of the US Open last year. If the higher-ranked Medvedev does it again, he could resume hostilities with Tsitsipas, who he memorably told to “shut your f*ck up” after the Greek was said to have called him a “bullsh*t Russian” during a match less than two years ago.

Whoever reaches the final four, the way that these players have made history by ensuring there are Russians on a Grand Slam quarterfinal bill has been the storyline this muted tournament needed. If the highlights reel in a year’s time depends upon hotel quarantine videos and players fretting about recovery times, it will have been testament to a Grand Slam barely worth the effort.

The most unlikely member of the trio has already guaranteed that the word “unprecedented” won’t solely be used in relation to unused seats and miniscule entourages. John McEnroe and Vladimir Voltchkov made the semifinals of Wimbledon as qualifiers 23 years apart and rank outsider Filip Dewulf was two wins away from glory in Paris in 1997, yet those feel like tenuous comparisons.

Perhaps the man who knows most about the scale of Karatsev’s task will be sitting in the world number one’s box should he face him later this week. Goran Ivanisevic won Wimbledon as a wildcard in 2001. He will be wary that Djokovic’s dominance has not diminished the capacity of tennis to deliver such shocks.

Also on rt.com
‘You in kindergarten, mate?’ Tennis bore Kyrgios accused of bullying Novak Djokovic after contradicting himself with more insults