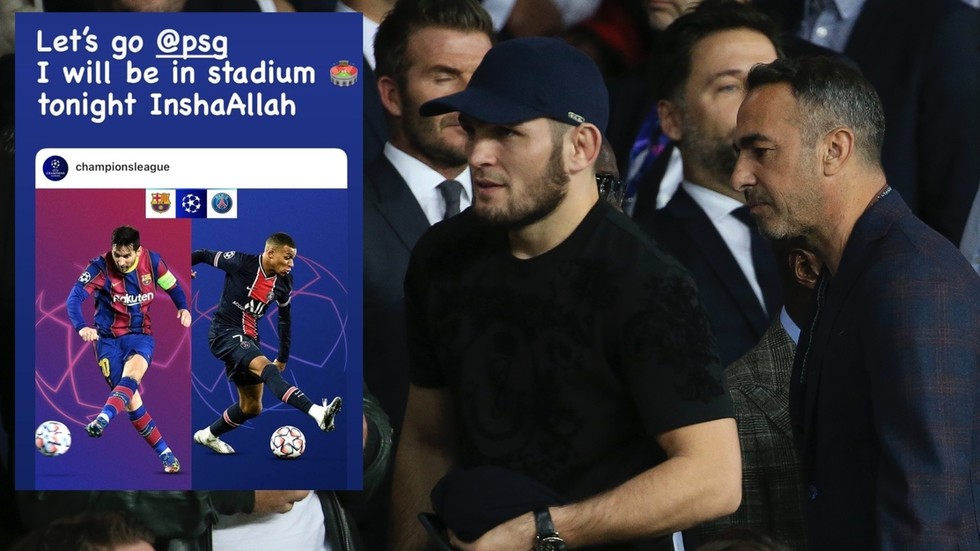 UFC lightweight champion Khabib Nurmagomedov will be in Barcelona’s Camp Nou for their UEFA Champions League fixture against Paris Saint Germain on Tuesday,

READ MORE:Announce Khabib: Russian champ receives public offer to make professional debut in ‘the football UFC’ as club bids to sign him up

Khabib, who retired from MMA undefeated with a 29-0 record last year, has already been a guest of honour at Parc des Princes, where he mixed with Youri Djorkaeff and David Beckham in the French capital.

“Let’s go PSG. I will be in stadium tonight. InshaAllah,” Khabib tweeted on Tuesday.

The Russian, who is regarded as one of the best mixed martial artists ever to grace the UFC, has made not secret of his love for football, has previously visited a number of Champions League matches.

Also on rt.com
Khab he kick it? UFC champ Nurmagomedov reveals ‘childhood dream’ to be professional footballer, and for which team


Although a fan of local club Anzhi Makhachkala and Spanish giants Real Madrid, Khabib has been snapped wearing a Galatasaray shirt at a game in Turkey, and is perhaps rooting for PSG tonight in support of rivals Real.

This winter, Khabib visited a training session of Russian Premier League side Spartak Moscow during their warm weather camp in Dubai. The 32-year-old had previously joked he was a free agent and was training for to gain a professional contract.

Former Barcelona man Neymar will miss a reunion with Messi and co. as the Brazilian picked up and injury that will see him out for a month and for both legs of the tie with Barca.