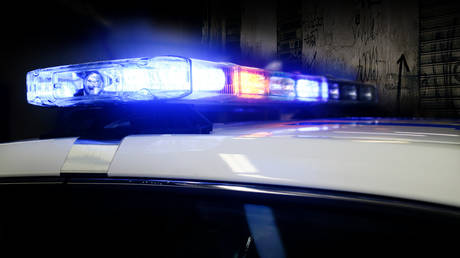 A Las Cruces policeman received a serious leg injury after a driver who he and fellow officers were trying to arrest sped away from a parking spot. The suspect remains at large.

The incident happened on Monday near a Sonic Drive-In restaurant in the central part of the New Mexico city, police reported. Three officers were “conducting a welfare check” on a driver when they deemed it necessary to take the man into custody.

Eyewitness footage of the incident published by local media shows a struggle taking place, with onlookers commenting that the police tasered the suspect and that the driver was screaming.

Moments later, the car takes off, driving over the curb and apparently hitting an officer who was standing by the right front door.

Police say the officer’s leg was seriously injured in the incident and that he was rushed to a local hospital. There was no report on his condition.

Mark James Esquibel, 40, was named as a person of interest in the case, but it was not clear if he was the driver. The vehicle was discovered sometime after the altercation in a west Las Cruces neighborhood, but the suspect remains at large, police said.