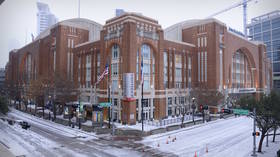 Thousands of doses of the Moderna Covid-19 vaccine were rushed into distribution after Texas power outages on Monday knocked out frozen-temperature storerooms in Harris County.

Problems arose after the power for the vaccine storage facility was knocked out, like many other places in Texas, due to a heavy winter storm. Wind turbines and solar panels were wiped out of service as snow and ice took over the state.

At least 5,000 out of 8,500 warming doses were distributed by Harris County Public Health to three hospitals, the county jail, and Rice University after officials hurried to get thousands of people vaccinated before the substance – which must be stored in temperatures between -25ºC to -15ºC (-13º to 5ºF) – spoiled.

County Judge Lina Hidalgo revealed that the places of distribution were chosen for being locations where a large number of people were already congregating, and where medical officials were normally stationed, however the county was eventually assured by Moderna that the doses could be re-refrigerated. The unused doses were then put back into storage.

Rice University’s student newspaper, the Rice Thresher, reported that 800 doses of the Moderna vaccine were given to those already on campus on a “first come first served basis.” Students and staff were both allowed to receive the vaccine.

Houston Methodist Hospital, which received 1,000 doses, claimed to have administered them all “in under three hours” without wasting a single drop, while the Harris County Sheriff’s Office used around 3,000 doses to vaccinate detention and patrol officers before offering it to prisoners.