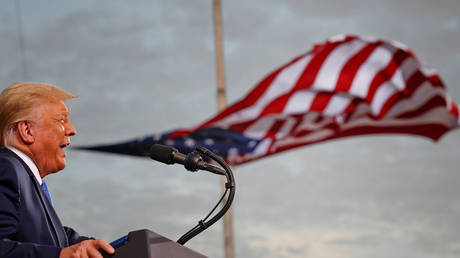 Despite the former US president’s tumultuous exit from the Oval Office as the first to be impeached – and acquitted – twice, Donald Trump remains the top pick of the majority of Republican voters for president in 2024.

Trump would be a clear favorite to win the Republican primary were it held today, according to a Politico-Morning Consult poll published on Tuesday. Nearly three fifths – 59 percent – of Republican voters want Trump to play a major role in the party going forward, and 54 percent would vote for the ex-president in the primary, the survey revealed.

The former president was acquitted on Saturday of charges he incited an insurrection at the Capitol. The riot reportedly led tens of thousands of Republicans to leave the party, and other pollsters claim a majority of Americans reacted by demanding Trump be “banished” from politics.

Still, his popularity has not flagged dramatically, and no other Republican candidate even came close to Trump’s popularity in the Politico poll.

Vocally anti-Trump Republicans scored abysmally in the same survey, from failed 2012 presidential candidate turned anti-Trump Utah senator Mitt Romney to Maryland Governor Larry Hogan, who said he would have voted to convict Trump in his second impeachment trial. They came away with 4 percent and 1 percent, respectively.

Also on rt.com
Majority of Americans want 3rd party as support for idea PEAKS amid disappointment in both Democrats and Republicans – poll


The only candidate aside from Trump who broke single digits was former vice president Mike Pence (12 percent). Presidential scion Donald Trump Jr. came in third with six percent, tying with former UN Ambassador Nikki Haley, who has repeatedly flip-flopped on her esteem for Trump, last week insisting the former president had “let us down” and arguing that “we shouldn’t have followed him.” Haley declared Trump was “not going to run for federal office again,” though it’s not clear where she got that information or if she was merely voicing an opinion.

While Trump would be 78 years old if he were to run again in 2024, he’d still be younger than President Joe Biden, who broke the record for oldest president ever to be inaugurated last month when he took office at that same age.

Trump has not committed to running for office again, though he has not ruled it out either. After he was acquitted of the impeachment charges, he promised his supporters that “soon we will emerge with a vision for a bright, radiant, and limitless American future.” According to the Guardian newspaper, a former White House insider said another Trump candidacy was “gonna happen…or he will be drafted.”

Trump fans kept the faith alive, with even his former campaign strategist Steve Bannon suggesting the ex-president might attempt to become a future Speaker of the House in 2022, with a potential prospect of impeaching Joe Biden.

Others seemed certain that no matter how many Republican votes Trump won, the GOP would never again take the presidency.

They want the coup, if he comes back in 2024, he will never leave. We will no longer be America. That is what the entire GOP wants, the end of democracy and liberty.

For all the folks who are concerned about “Trump 2024,” please consider that all democrats need to do is pass a law requiring presidential candidates to release all of their taxes.That would put an end to that idea real quick.

Interestingly, many thought that freaking out about a potential return of Trump was missing the point.

If you’re angry that Dems didn’t impeach Trump because, “he can run in 2024” you are literally missing the entire point that we don’t have real elections, this is all theater & impeaching Trump was a waste of time to distract you from their complicit failures. Wake the fuck up!

Some argued that Biden’s failures were already sealing his fate – Trump or no Trump. Florida Rep. Matt Gaetz (R) suggested his state’s Governor Ron DeSantis might be able to step in in 2024 if Trump were unable or unwilling, highlighting the Republican’s refusal to forcibly impoverish his state during the Covid-19 pandemic as a plus.

“People see Florida businesses are opening and unemployment is dropping, and home buying is increasing,” Gaetz told Fox News on Sunday, responding to Biden’s threats to restrict air travel to the Sunshine State. “That type of prosperity is attractive to people who are having to endure a lockdown in other parts of America.”