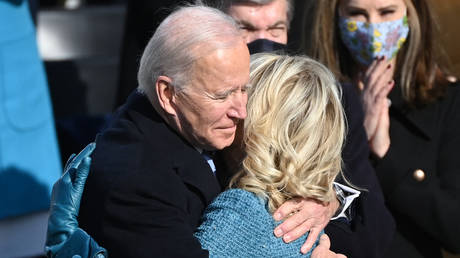 Fox News host Tucker Carlson has outraged Democrats once again after he appeared to suggest President Joe Biden’s relationship with his wife is a carefully-devised PR campaign, mockingly saying it is “as real as climate change.”

Reacting to the glowing coverage celebrating Biden’s public displays of affection with his wife, First Lady Jill Biden, and glee over a supposed return to ‘normalcy’ following chilly public interactions between former President Donald Trump and his wife Melania, Carlson put his own spin on the situation.

“Not since Antony dined with Cleopatra at downtown Antioch, before they killed themselves obviously, has a country witnessed a love story as moving and poignant as Jill and Joe’s,” said Carlson sarcastically on his Tuesday show.

“No, ladies and gentlemen, Jill Biden is not Joe’s caretaker. She isn’t his nurse. She’s his fully-equal romantic partner. Together they are like besotted teens, yet at the same time they are the wise and knowing parents of a nation,” he continued.


He then implied the public displays of affection were “part of a slick PR campaign devised by cynical consultants,” designed to “hide the president’s senility,” adding that in his view, their love is “as real as climate change.”

Carlson has previously shot down concerns about climate change, calling it “systemic racism in the sky” – “You can’t see it, but rest assured it’s everywhere and it’s deadly.”

This is obviously offensive and deranged. But it’s actually a good sign – it means that Tucker has no idea how to attack Biden and nothing he’s trying is working. https://t.co/3FEchCPpyE

“Tucker has completely lost it,” declared ThinkProgress founder and former Hillary Clinton staffer Judd Legum, while journalist Jeet Heer wrote, “So if I’m understanding the scenario correctly, in 1977 Jill Jacobs entered into a loveless marriage Joe Biden with the plan that 40+ [years] later he would be a senile president who she could control, Edith Wilson style. That’s a really long run plan!”

Others were more outraged at Carlson’s comparison of the first couple’s relationship to climate change, with some saying the Fox host had inadvertently proved climate change was in fact real.

So wait. Tucker is saying their love is not only 100% real but backed up by decades of research and overwhelming scientific consensus? https://t.co/xfhOqBqMug

Some social media users did agree with Carlson’s analysis, however, with one Trump supporter tweeting, “As a woman, I can easily see the @JoeBiden and @DrBiden relationship is fake as hell. I can’t stand either one of them. They both disgust me.”

Despite consistently being the most-watched man in American cable news, Carlson is also one of the most controversial due to his no-holds-barred attacks on Democrats and Big Business Republicans alike.