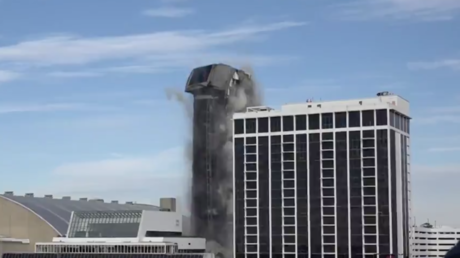 Donald Trump’s former hotel and casino on the Atlantic City Boardwalk in New Jersey was taken down in a controlled demolition on Wednesday, with spectators actually paying to view the event and cheering as it came down.

While the Trump Plaza Hotel and Casino had once been one of the big attractions on the Boardwalk, it had fallen into disrepair since closing in 2014, with debris beginning to peel and fall off the building.

It was destroyed in a controlled demolition on Wednesday morning, leaving in its wake nothing but rubble.

The former events manager for the casino, Bernie Dillon, said the hotel had once hosted major celebrities like Jack Nicholson, Warren Beatty, Mick Jagger, and many others.


“It was like that a lot: You had Madonna and Sean Penn walking in, Barbra Streisand and Don Johnson, Muhammad Ali would be there, Oprah sitting with Donald ringside,” Dillon told NBC News.

Though Trump’s name was on the building, he moved away from the business in 2009.

In footage of the building coming down, crowds can be heard cheering.

Spectators could pay $10 to watch the demolition, though others gave much more. Some paid hundreds of dollars for the chance to get a front-row seat at buildings with direct views of the implosion.

“It’s an end of a not-so-great era,” said Jennifer Owen, who bid $575 to see the building come down from the VIP breakfast, according to the New York Times.


There was previously even an auction that would have given someone the chance to push the button that set off the explosion, with the money going to charity. This was canceled, however, after an objection from the building’s owner.

Other Trump critics not willing to pay or travel celebrated the building’s demise on social media as a quasi-victory over the controversial Republican.

This Trump Plaza Hotel demolition has got to be a metaphor of the Trumpublican party…right?And yes people are cheering 🤭 https://t.co/QEBstG3jpt