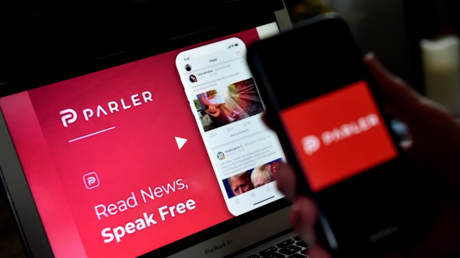 The interim CEO of the conservative-friendly social media site Parler has invited both President Joe Biden and his predecessor Donald Trump to create accounts, encouraging “civil discourse” after announcing the platform’s return.

Parler’s new acting chief executive, longtime Tea Party activist Mark Meckler, extended the offer to the current and former president during an interview with Fox News on Tuesday night, saying both are welcome on the site.

“What Parler’s really about is being a public square, and a public square is where anybody can come, they can say what they want as long as it’s legal. And Donald Trump hasn’t said anything illegal, as far as I’m aware. He certainly didn’t on Twitter, didn’t on Facebook or any of the other places that he was banned,” Meckler told Fox’s Neil Cavuto.

[Trump] would be more than welcome to join us on Parler, we would be happy to have him along with President Biden. We’re happy to have anybody from any party who wants to come on and engage in civil discourse.

It was unclear if Trump is planning to join the platform, as the CEO noted that he has not communicated with the former US leader personally and isn’t aware of any discussions between the Trump Organization and anybody at Parler.

Biden in the meantime is highly unlikely to accept the invitation, not only because of the ‘controversial’ nature of the conservative-friendly network, but also not to turn the spotlight on “the former guy,” as he referred to Trump during a CNN town hall on Tuesday.

“For four years, all that’s been in the news is Trump… I’m tired of talking about Trump,” Biden said.

Also on rt.com
‘We will not be canceled’: Social media platform Parler RELAUNCHES after being axed by Big Tech following Capitol riots


Meckler’s comments on Tuesday night followed a statement earlier in the day declaring that Parler had come back online from a weeks-long hiatus after Amazon Web Services booted the platform from its servers last month. In light of the January 6 riot on Capitol Hill, Amazon argued the site’s content moderation policies were too lax and allowed violent and hateful speech to proliferate.

In his interview with Cavuto, Meckler said that while Parler is back online, the company is still in negotiations to get its app reinstated at Apple’s App Store, but added that the site is “not really interested” in returning to Google’s Play Store, calling the tech behemoth “anti-free speech.”

Meckler was installed as Parler’s interim CEO on Monday, after its board voted to oust the former chief executive, John Matze, earlier this month. According to Matze, Meckler was on Parler’s “executive committee” before being elevated to the CEO role.