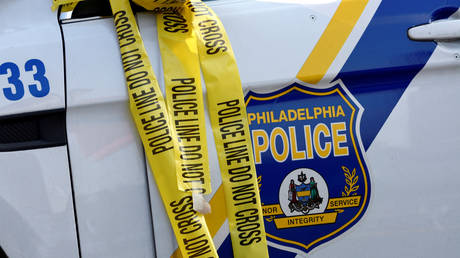 A total of seven people have been shot outside a SEPTA transit station in Philadelphia, Pennsylvania, police have confirmed. One person was arrested and two guns were found at the scene.

The shooting happened on Wednesday afternoon near the Olney Transportation Center in north Philadelphia, located between two schools and a hospital. Initial reports from the scene spoke of one person killed, but police have since said they are still working to confirm the condition of all the victims.

Two people were shot in the back and three more in the arms and legs, while the status of two of the victims remained unknown as of 3:30 pm local time. At least one person was taken into custody, and two guns were recovered at the scene, police said.


Philadelphia has seen a sharp rise in homicides in 2020, with 499 murders compared to 355 the previous year. The increase in violent crime has been accompanied by a drop in drug and property crimes – with a notable exception of car theft – according to the latest study by the Council on Criminal Justice, a Washington, DC-based nonprofit.

The CCJ report attributes the crime pattern to the Covid-19 pandemic, but noted that “calls for police reform and a decline in arrests for certain crimes” could be a factor as well.