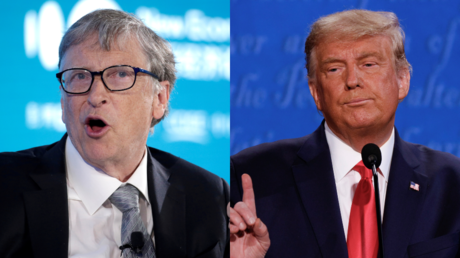 Microsoft founder and synthetic meat enthusiast Bill Gates has said former President Donald Trump should be let back on social media “at some point.” Trump himself thinks that social media has “become very boring” without him.

“I think at some point he probably will be allowed back on and probably should be allowed back on,” Gates told CNBC on Thursday, more than a month after Twitter and multiple other social media outlets booted Trump from their platforms, with Twitter’s reasoning being that the president’s calls to protest the 2020 election results presented a “risk of…violence.”

Gates is considered by many to be an expert on healthcare, agriculture, and disease control, despite his lack of qualifications in these areas. Now he’s evidently added free speech issues to his portfolio, telling CNBC that Trump’s allegations of election fraud were “weird” and “corrosive.”

Also on rt.com
Bill Gates wants ‘rich nations’ to switch to 100% SYNTHETIC beef to save the planet


“But I’ll bet they’ll find a way to let him back on,” Gates added, before suggesting that, should the social media companies let Trump back onto their platforms, the former president’s content “may be labeled as false in a lot of cases.”

Before Twitter led the charge to deplatform Trump, the site was also the first to slap warning labels on his tweets. Some had their sharing restricted, while others were removed altogether from the platform. Even before the election, Twitter targeted a number of tweets Trump posted about last summer’s ‘Black Lives Matter’ riots for allegedly “glorifying violence.”

Even if Trump were allowed back on social media, Gates suggested that as time passes, “people’s interest in what he says may go down quite a bit.” Denied his favorite platform for mass communication, Trump has indeed remained quiet since leaving office, occasionally opining on politics in Washington via official statements. Trump’s most recent missive, which targeted Senate Minority Leader Mitch McConnell, retained his signature tone, however; he described McConnell as a “dour, sullen, and unsmiling political hack” who “doesn’t have what it takes, never did, and never will.”


The former president also called in to several conservative news networks on Wednesday evening to mourn the passing of right-wing pundit Rush Limbaugh. During one conversation with Newsmax’s Greg Kelly, Trump declared that Twitter has “become very boring” since his suspension.