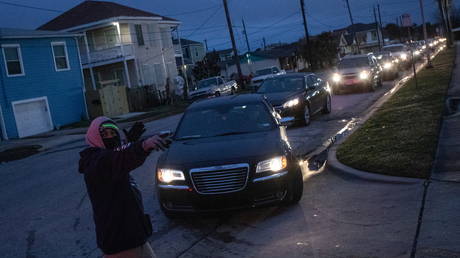 Ex-Governor Rick Perry stoked outrage after saying Texans would willingly tolerate further blackouts just to keep the feds “out of their business,” as critics blamed his preference for deregulation for the state’s power woes.

Perry – who also served as Energy Secretary under former President Donald Trump – was featured in a blog post on the website of House Minority Leader Kevin McCarthy (R-California) on Wednesday, where he was asked about Texas’ struggling power grid after a massive winter storm left 4 million residents without electricity this week.

The former governor argued that Texas simply requires more baseload power to weather storms like those seen in recent days, suggesting that Texans prefer technology to regulation as a solution to the state’s electricity problems.

“Texans would be without electricity for longer than three days to keep the federal government out of their business,” Perry said – “partly rhetorically,” according to McCarthy’s site.

Try not to let whatever the crisis of the day is take your eye off of having a resilient grid that keeps America safe personally, economically, and strategically.

Also on rt.com
At least 20 dead as winter storm pummels US states, leaves millions in Texas without power in freezing temperatures


The offhand remark soon prompted a wave of condemnation for the ex-governor, with critical netizens interpreting his words as urging Texans to go without power – and heat – to satisfy Perry’s own aversion to federal regulation.

Rick Perry says Texas prefer to die because of Texan incompetence then live because of Federal regulation.How noble of him!

“Rick Perry thinks Texans should freeze to death, so Republicans can continue deregulating and enriching fossil fuel companies,” one user said, while another accused Perry of presiding over “the deregulation of the Texas power grid” during his tenure as state executive.

BREAKING NEWS: Rick Perry says Texans are willing to eat rats and trash to keep the Federal government out of the food industry.

While Perry is an open proponent of deregulation, the issues with Texas’ power grid are more complicated and extend well before his stint as governor.

Unlike the rest of the United States, which is served by two larger grid networks, Texas has its own independent power infrastructure – the result of agreements between Texas utility firms following a 1935 policy by then-President Franklin D. Roosevelt directing regulators to oversee interstate electricity sales. By agreeing to keep their services in-state, the utilities have largely avoided federal regulation, though are still overseen by the Texas Public Utility Commission.

Because the Texas grid is largely isolated from the rest of the country, however, the state is unable to draw power from other states in the event of major power shortages like the ones seen this week amid the inclement weather.

The non-profit currently operating the state’s electrical grid, the Electric Reliability Council of Texas (ERCOT), has come under fire for being ill-equipped to handle the winter storm and failing to properly weatherize power infrastructure to deal with below-freezing temperatures. State lawmakers have demanded an investigation into ERCOT’s management, while Governor Greg Abbott also placed blame on the agency, saying “this was a total failure by ERCOT.”

ERCOT stands for Electric Reliability Council of Texas, and they showed that they were not reliable.