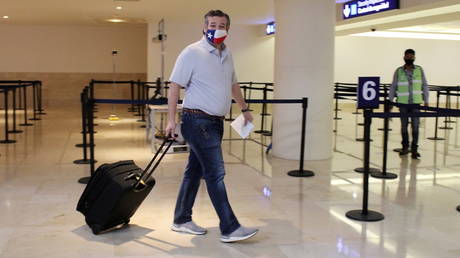 Texas Republican Ted Cruz is being ripped to shreds on social media for apparently covering up a trip to Cancun by recasting it as an overnight and changing his flight – all while his Texas constituents froze in the dark at home.

Cruz allegedly called United Airlines at 6 a.m. on Thursday to change his flight the morning after his disastrous recognition at the Houston airport with his family en route to Cancun. After the senator was lambasted for taking a beach vacation as millions of Texans sat freezing without electricity or heat in the grip of a massive power outage coinciding with a winter storm, Cruz had his return flight changed from Saturday to Thursday evening, according to an airline source cited by travel industry outlet Skift.

Here’s the upgrade list for this afternoon’s flight from Cancun to Houston. Looks like ⁦@tedcruz⁩ is on his way back, ⁦@danpfeiffer⁩. He’s just narrowly missing the upgrade listThat’s assuming that “cru, r” is him. And I do. pic.twitter.com/CqfKa5rJfG

And just like that, Ted (Rafael) Cruz seems to be on his way back to Texas. “CRU, R.” is on the upgrade list on this afternoon’s flight from Cancun to Houston. He was on the list on yesterday afternoon’s flight down to Cancun, too. pic.twitter.com/4SJano1zb3

An image of the upgrade list for the United Airlines 4:05pm Thursday flight from Cancun to Houston posted to Twitter includes one “CRU, R.” – Cruz’s given name is Rafael – standing by for business class.

READ MORE: ‘My family freezing, my senator is in Cancun’: Twitter explodes as Ted Cruz accused of traveling out of storm-hit Texas

While the senator eventually released a statement on Thursday acknowledging it had “been an infuriating week for Texans” and explaining “our family lost heat and power too,” the rest of the explanation – that the Cruz daughters had asked to “take a trip with friends” on the spur of the moment and, with school closed for the week, Cruz had just picked up and gone with them with the intention of returning the next day – rang false with many readers.

Cruz’s detractors on social media warned him the coverup was worse than the crime, pointing to his prodigious suitcase – not exactly an overnight bag – and the apparent ticket change.

Neither Cruz nor his office has acknowledged this trip yet. If they claim he was simply flying with his family and planned to return immediately, please remember he was photographed with his own (massive) carry-on bag. pic.twitter.com/qZTzq6SesK

Texas Sen. Ted Cruz returning to the United States with a giant suitcase he claims held just enough clothes for an overnight trip to Mexico as a child travel Sherpa. 🙄 pic.twitter.com/CTUvw9uz5r

Others wondered what happened to the “long-planned trip” he had supposedly embarked on – referenced by an AP source “with direct knowledge of the situation” – before realizing that leaving his constituents literally out in the cold didn’t look good.

It is worth noting, the @AP source on this story said the trip was “long planned” which contradicts this statement that @tedcruz‘ daughters asked to go on a trip because school was cancelled this week. We are still working to hear from his office, but haven’t gotten a response. https://t.co/Gz5hWYlvdi

And some with better memories reminded Cruz that he’d slammed Austin Mayor Steve Adler for taking a private jet to Cabo while telling his constituents to “stay home if you can” over Thanksgiving just a few months ago – before apparently pulling the same stunt, but without the chutzpah to follow through.

lol Phil! “Meanwhile, in Cancún the high was projected at 85 degrees Thursday with a low of 73 Thursday night. The region is not experiencing any widespread power outages, according to Mexico’s Comisión Federal de Electricidad.” https://t.co/1A3oRhJQuo

Many marveled at Cruz’s ability to throw even his family under the proverbial bus.

Of all the scummy things he’s done, Mr. Personal Responsibility Ted Cruz blaming his *kids* for his trip to Cancun during a national emergency really does shine a spotlight on exactly the kind of person he is.

If abandoning his constituents during a natural disaster doesn’t end Ted Cruz’ pathetic career, throwing his own daughters under the bus might.

And even Cruz’s defenders could only attempt to point the popular rage at a politician with a five-digit body count.

Ted Cruz took his family to Cancun.Andrew Cuomo murdered 15,000 senior citizens.Why are liberals only focused on the first thing?

How is it possible that blue check Twitter is spending more time trying to destroy Ted Cruz taking a family trip but refuses to focus on Gov Cuomo’s lies, coverups, and strong arm tactics that killed thousands?