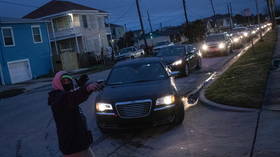 The governor announced during a media briefing on Wednesday that he had issued a decree forbidding gas producers from selling to clients outside the state through February 21.

Citing the current weather crisis that has crippled the state, Abbott said the order would help increase the ability of gas-fired generators at a time when surging demand has overwhelmed Texas’ power grid.

Around 1.7 million Texans are still without electricity after freezing temperatures knocked out much of the state’s energy infrastructure. Dan Woodfin, a senior official at Texas grid operator ERCOT, said in an interview that the lack of gas supply has hampered efforts to get power plants working again.

However, it’s unclear whether Abbott has the authority to prevent gas from leaving his state. The move could potentially be a violation of trade agreements with Mexico, which is heavily reliant on energy imports from Texas. In a letter to the state’s energy regulator, Abbott explained that gas should be made available to local power generators before it is shipped out-of-state.

Texas and multiple other US states have been battling frigid temperatures over the past few days. The extreme weather has been linked to at least 20 deaths across the country.