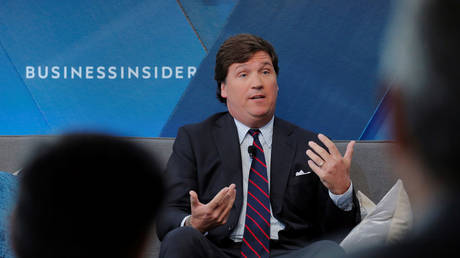 Cancel culture had its second major defeat in less than a week, as efforts to force Fox News star Tucker Carlson off the air failed so spectacularly that the guy called ‘TV’s most hated host’ has been given another show.

Carlson signed a multi-year deal with Fox Nation, the network’s subscription-based streaming service, under which he will produce at least three video podcasts each week and long-form monthly specials. The new programs will be done in addition to Carlson’s top-rated primetime show on Fox News, ‘Tucker Carlson Tonight’, which is broadcast every weeknight.

The podcasts will feature interviews with newsmakers and discussion of “issues shaping the country,” Fox Nation said on Wednesday. The Tucker Carlson Originals series will explore one topic at length each month.


The new contract will come as bad news to the likes of Media Matters for America, the activist group backed by billionaire George Soros that has repeatedly campaigned for advertisers to drop Carlson’s show and other Fox programs for such sins as being critical of Black Lives Matter and illegal immigration.

Commentators at such media outlets as CNN, MSNBC, the New York Times and the Washington Post opined that in the wake of the January 6 US Capitol riot, cable TV carriers should jettison Fox News. Vox writer Aaron Rupar ripped the network again on Wednesday for allowing former President Donald Trump to make reference to his election-fraud allegations in an interview about Rush Limbaugh’s death.

Washington Post columnist Max Boot argued last week that with former President Donald Trump gone from the White House, Carlson’s “conspiracy theories” might make him “the most dangerous threat to US democracy.” CNN host Brian Stelter seemed to be salivating way back last June that the boycott movements against Carlson were causing “headaches for Fox News.”

But just as actress Gina Carano resurfaced last week with a new movie contract after being fired from ‘The Mandalorian’ TV series, Carlson came through the latest round of mob attacks better off than where he started.

“This is my twelfth year at Fox News, and I’ve never been more grateful to be here,” Carlson said. “As other media outlets fall silent or fall in line, Fox News Media’s management has redoubled its commitment to honesty and freedom of speech. I consider that heroic at a time like this.”

Also on rt.com
Gina Carano is showing how to beat cancel culture by making a movie with Ben Shapiro. Others must go independent and follow suit


Anti-Trump activist David Frum quipped that adding a streaming show for Carlson was a way for Fox to provide a daily serving of “rage and paranoia” to younger viewers while keeping the broadcast show for “Boomer viewers.” But anti-Trump enthusiast Dawn Forbrick was in no mood for jokes at the news of Carlson’s new show, telling Frum, “There has got to be something we can do.”